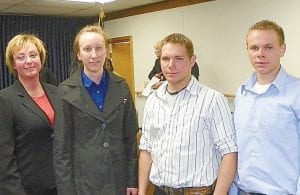 FLINT TWP. — At a recent meeting, the Board of Trustees unanimously approved the promotion of Jesse Jarnigin, Joshua Jarnigin and Michele Wilson to the rank of On-Call Fire-Fighter Entry Level — Probationary, effective April 1.

The three were hired in September as uncertified on-call firefighters and on March 23 completed the Fire Academy and became certified as Firefighter I and II. Chief John E. Ringwelski recommended the promotions. — R.S.