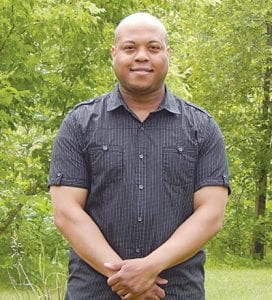 Hank Davis has published an e-book about his entrepreneurial endeavors to encourage other struggling business developers.

FLINT TWP. — Many people who hate their jobs resign themselves to tough it out, never brave enough to quit or venture out.

Hank Davis, a Flint Township resident, is one of those rare people who dare to do something about it. Last November, he quit his retail management job after 15 years to go after his dream of being an entrepreneur.

Yes, his friends and family thought he had lost his mind. And no, it has not been easy. But Davis said he is busier now working for himself than he was working full-time for someone else.

He has written an e-book about his experiences aptly titled “Uphill Entrepreneur: Insights from my Journey of Becoming an Entrepreneur” Unlike many successful entrepreneurs who become authors, Davis has written his book at the beginning of his journey – from the bottom of the hill, so to speak, instead of at the peak.

The e-book, which launched online Monday, is not a how-to book, but more of a pep talk for any struggling or would-be entrepreneurs trying to decide whether to take that leap of faith or remain stuck in a no-thrill job.

“The main thing that I want people to understand is that you have to know yourself before you can know what market you are going to try to fit into or to make a full-time job replacement,” Davis said.

He knew from an early age that he wanted to become an entrepreneur.

“As a kindergartner, I dressed up as a businessman for Halloween,” he said in the book. He grew up as the youngest of 11 children in Millington.

Davis started his retail career after a few years of professional boxing.

In addition to being a writer, he now also makes a living as a podcaster, video editor, marketing consultant, etc.

At one point, Davis admits he was simply chasing dollars. But his goals did not begin to gel until he changed his focus to service.

His e-book discusses four key qualities he believes are essential to getting a business venture off the ground: passion, determination, happiness and confidence.

“I stand before you as an entrepreneur marching forward, seemingly uphill towards my goals,” he said in the e-book. “I make no claim that I’m a multimillionaire or that by reading this book you’ll become one either.”

“I am someone who is not bound by where he stands on his journey. I am undeterred by roadblocks, fears or failures, and if you want to be a successful entrepreneur, you must shed the bondage of fear and failure as well.”

“Uphill Entrepreneur” is a quick read at about 10,000 words and written in an engaging, easy-to-read voice. Priced to sell at $2.99, it can be purchased and downloaded from Amazon Kindle, Barnes & Noble Nook or as a PDF from Davis’ websites at www.UphillEntrepreneur.com or tpenetwork.com/

TigerPrince Entertainment is home base for all of Davis’ business enterprises and provides access to his podcasts and e-book sales.

He also has submitted the e-book for hard copy publishing to Entrepreneur Press and expects to hear back from them in about a month, he said.