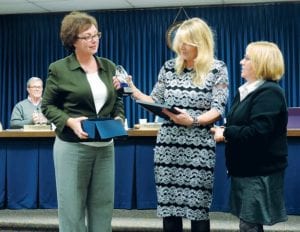 The township board honored longtime employees Ronna Gettel and Mark MacDermaid, who are retiring.

FLINT TWP. — The township board bade farewell last week to three long-time employees – issuing proclamations and hosting a traditional cake and coffee reception for two of them.

Ronna Gettel, who worked in the assessor’s office for 27 years, and Mark MacDermaid, an appraiser for 35 years, were honored with proclamations and a cake.

The township board also accepted a formal notice of retirement from Pamela Knowles, a clerical worker in the treasurer’s department for 22 years. Her last day of work will be December 31.

Gettel’s proclamation acknowledged her professionalism ability, thoughtfulness and dedication. She began her career as an assessor in 1979, after earning her Level 1 title. She continued her education and ultimately achieved a Level 3 title of Michigan Advanced Assessing Officer (MAAO) and Personal Property Examiner.

Gettel served as Deputy Treasurer for Sandra Wright from October 1, 2001 to December 31, 2004. She was known for her historical knowledge about properties and businesses in Flint Township and also cited for dependability, conscientiousness and for being the first employee to arrive at work every morning. 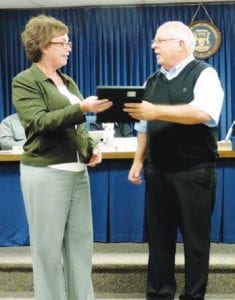 Gettel is also a loyal and faithful volunteer with the Swartz Creek Kiwanis Club and a member of the United Methodist Church of Swartz Creek.

MacDermaid and his company, Landmark Appraisal, worked tirelessly to adhere to the standards and practices set by the State of Michigan Tax Commission, according to his proclamation. He was a familiar face during decades of Board of Review sessions and served as a role model and mentor to others in the Flint Township Assessment Department.

MacDermaid also collected delinquent personal property taxes on behalf of the Treasurer’s Department for many years.