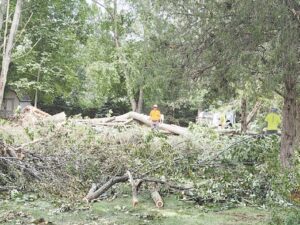 FLUSHING TWP. — Flushing Township is assisting homeowners who are still dealing with debris from severe storms that rolled through the area on Aug. 11.

During an emergency meeting held last Wednesday, the Flushing Township Board of Trustees voted unanimously to allocate $30,000 from the township’s general fund balance, which will be used to hire a contractor to clean up stacks of logs and brush piles left over by tree companies two weeks ago.

According to Supervisor Fred Thorsby, most of the companies that were hired by homeowners completed their work by hauling away fallen trees and limbs or using chippers to break them down. However, some contractors left behind massive brush piles and huge logs in several Flushing Township neighborhoods.

Thorsby said that many of the remaining logs are up to 12 to 16 inches in diameter and at least 16 feet long.

“What disturbs me the most is that some of these companies were paid to remove this debris, but they just piled it up at the curb and left it,” he said. “A homeowner has no ability to move a log that size or that amount of brush.”

Thorsby said that an outside contractor offered to clear the logs and brush away for $1,000 an hour, while a local contractor said he could complete debris removal at $400 an hour.

Once a tree company has been selected, the township will place signs at the entrance of each affected subdivision to let residents know that clean-up efforts are starting. Thorsby said that the work should begin by Aug. 30.

“We’ll map out the areas and direct the contractor on where to go and which addresses to visit for clean-up,” he said.

As confirmed by the National Weather Service, the Aug. 11 severe storm produced a microburst packing winds in excess of 60 to 70 mph, toppling trees and power lines as it moved through the Flushing area around 10 p.m.

According to weather.gov, a microburst is a localized column of sinking air (downdraft) that collapses within a thunderstorm and sends a rush of high winds across the ground. At their peak, microbursts can reach up to 100 mph or even higher, which is equivalent to an EF-1 tornado.

Although the City of Flushing also experienced tree damage and power outages, the area most impacted by the storm was a two square mile stretch of Flushing Township between the Flint River and Coldwater, Elms and Carpenter roads. Flushing Township officials said that the microburst first spawned on Seymour Road before jumping the river near Carpenter Road and the Flushing County Park, where it inflicted the most tree and wind damage to residences.

Among the hardest hit neighborhoods were Apple Hill Estates and the Granrich and Ponderosa subdivisions, along with residences along McKinley and Deland roads.

“It was a devastating, unforeseen weather event,” said Trustee Bill Bain. “It looked like a bomb went off on McKinley Road, and it impacted so many of our neighbors and friends. This was the right thing for us as a board to take action and set money aside for clean-up.”

In light of the sudden impact of the Aug. 11 storm, the township is encouraging residents to sign up for Smart911, a service available through Genesee County 911 that sends alerts and severe weather notifications via text message, email and/or voice message. To register for the service, visit Smart911.com.