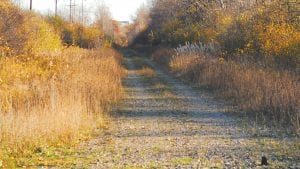 TRAIL WAY — A portion of the proposed Genesee Valley Trail project includes this section of the former railroad tracks off of Dutcher Rd. between Lennon Rd. and Corunna Rd.Photo by Natalie Blythe

Since the trail project was approved, individuals, businesses and organizations in the township and beyond have contributed thousands of dollars to the project, which involves converting an abandoned railroad into a recreational trail. The original plan for the trail, which is 2.3-miles, begins at Corunna Rd. and the old railroad crossing (near Ballenger Hwy.) and ends at the north signal light near the entrance/exit of Genesee Valley Center. Since the original plans were made, the committee decided to add an extension of the trail, adding 3,050-feet, and ending it near the police station at Norko and Fleckenstein Drives. With the extension, the Genesee Valley Trail would be three miles. According to officials, the extension does not increase the cost required of Flint Township.

Construction on the Genesee Valley Trail should begin in Spring 2011. Miller said a grade inspection is set for Dec. 15 with representatives from Michigan Department of Transportation (MDOT), Genesee County, the Genesee County Road Commission, the township and other entities involved. The location of the meeting will be announced at a later date.

Recently, households in the township have received double-sided postcards in the mail regarding the Genesee Valley Trail project and Miller. The mailers call into question the trail project, citing a reader comment from the Mlive.com website from a Sept. 5 article in The Flint Journal. The comment, attributed to “bobc1” calls the project a “hairbrained idea” and states “Yeah, all we need is a bike trail and a walking trail to back up traffic some more.”

The mailers also state that the trail costs $975,000 in grant money “which is still your tax dollar” and that the township “contracted with an engineering firm out of Oakland County for $44,000” and questions why an engineering firm from the local area was not involved, along with saying that the trail will be funded from “part of the money coming from your road millage which is illegal. This money was voted by the people and designated for roads only.”

Jim McClung from the Parks and Recreation Committee, who received a postcard in the mail, said the parks and recreation committee “does not deserve to get drug into this.”

“It looks bad for everyone involved and who has worked on the trail,” he said. “We have done nothing but positive things for the township. Politics shouldn’t come into the parks.”

McClung also said information regarding the Genesee Valley Trail that was used in the mailer is wrong. The township received $950,400 through a federal grant for the project and if the township had not acted quickly, “it would have gone to another community,” he said.

In regards to the claims against Wilcox Engineering, McClung said the fee for the firm is $42,000. The firm lowered its initial fee of $44,000 to $42,000 as a way of helping out the township on the project. Wilcox Engineering does have a location in Genesee County, on W. Bristol Rd. in Flint Township.

“Wilcox was hired by the Genesee County Planning Commission to do the preliminary plans,” Miller said. “They were the lowest bidder.” So far, Miller said Wilcox has completed 70 percent of its work on the project, and has only billed the township for $14,700. Miler said the bill will be paid out of the donations received for the Genesee Valley Trail project. “We’re dedicated to pay for the engineering from money raised,” she said.

In regards to the claim that using the road millage funds are illegal, McClung said that was incorrect. At a previous board meeting, MIller said she had received opinions from the township’s attorneys and Plante & Moran, saying that the township could use money from road millage funds to pay for portions of the Genesee Valley Trail that were in the right of way or in the road, if not enough money was raised.

At the Sept. 20 meeting, Ken Grover, who serves on the road advisory committee, reported that the committee, with the exception of Miller, unanimously voted against using road millage funds for the trail at its Sept. 13 meeting.

“I’m personally in favor, but not for us to use road funds,” he said during the meeting. “We are dutybound.” Citing language in the millage, Grover said it was “inclusive to provide funds for road millage and improvements.” In response to his comments at the time, Miller said the Genesee Valley Trail project was within the legal rights for using road millage funds.

Individuals and businesses interested in making donations to the Genesee Valley Trail project can stop by the township offices, 1490 S. Dye Rd., or call 810-732-1350. For more information on the trail, visit geneseevalleytrail.com/.