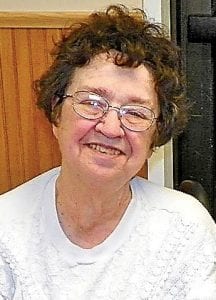 Flint Township Treasurer Sandra Wright has announced she will not seek re-election to a sixth term.

FLINT TWP. — Township voters will elect a new treasurer in November for the first time in 20 years.

After five terms in office, township treasurer Sandra Wright has announced she will not seek re-election for the post she won the same year Bill Clinton was first elected president and a first-class stamp only cost 29 cents.

“After 20 years of service, I am looking forward to retirement,’’ Wright said this week, after the township board meeting.

Her husband Don Wright offered that residents kept re-electing her because they trust her.

“Twenty years and five terms, you have to be doing something right,’’ he said.

Losing her leg due to an illness in 2009 slowed her down a bit but she’s on the job at the township office every day, he said.

Sandra Wright smiled and called him her biggest fan.

She’s acquired a huge fan base in two decades of service.

Part of her legacy includes a role in building a new police station with no additional costs to taxpayers, maintaining the same low millage rate for 20 years, CDBA investing of $1.7 million with a return of $14 million for township needs; and paying off sewer and water bond accounts two years early.

As the township’s chief investment officer, Wright gave an excellent rating to the return on investments.

She’s served on numerous township boards including the Fire Retirement Board; Liquor Advisory Board; and ten years as director of the Sewer/Water Department.

She also is one of only 496 out of 6000 treasurers in the nation to achieve the designation of “Certified Municipal Finance Administrator.”

She’s received several state proclamations, employee recognitions, the Patsy Lou Award for Leadership and the C.D.B.A. Award of Distinction. She also was recognized as an outstanding employee with a disability by the Disability Network.

Wright said she has endorsed Marsha Binelli, a former township employee, for the treasurer’s job. Binelli is running with a slate of candidates calling itself the Leadership for 2012 and Beyond Team.

Wright’s advice to her successor is to “stand on on their integrity.”

“They have some challenges ahead of them,’’ she said of the townships’ ongoing struggle in recent years with declining property values and dwindling revenues.

Wright said she has no post-retirement plans other than to spend time enjoying her grandchildren and traveling.