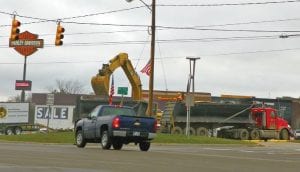 A NEW YEAR’S EVOLUTION — Construction crews arrived Dec. 10 to begin removing storage tanks and other remnants of the former Patsy Lou Fine Cars dealership at at the corner of Miller Road and Austin Parkway, next to I-75. The lot has been sold to neighboring Vehicle City Harley-Davidson which continues to expand its footprint. Formerly Cummings Harley-Davidson of Burton, the business changed its name and location in 2009 after moving into a 35,000 square-foot dealership at 2400 Austin Parkway. She said that construction crews are expected to return to raze the building on the Miller Road site by the end of the year.

FLINT TWP. — Apparently there is no interest in eight, vacant, buildable lots on Boulder Drive in the Flagstone Pointe subdivision off River Road. Not even the township board wants them and recently refused ownership of them along with about 120 other parcels on the county’s list of tax reverted properties provided by the Genesee County Treasurer’s Office.

Neighboring homes on Boulder are valued on average at about $150,000. Some homes in the approximately 20- year-old subdivision are valued even higher.

The eight vacant lots on Boulder have a state-equalized value of $10,000 to $12,500, according to tax records at the Genesee County Clerk’s office. Nonpayment of taxes led to this unfortunate end.

That placed them on a county wide list of properties to be sold at public auctions which were held in September and October. The first auction set a minimum bid and the second one had open bidding. But apparently there were no takers.

Under Public Act 123, all parcels not sold at the mandatory yearly auctions automatically revert back to the municipality where they are located unless written refusal is received by the Foreclosing Governmental Unit (Genesee County), according to a notice from county treasurer Deb Cherry, that accompanied the list of tax-reverted properties list.

Some municipalities accept the unsold properties for public use or sale but the Flint Township board has turned down properties in the past, saying it cannot afford to be in the real estate business. That responsibility now lies with the Genesee County Land Bank which is automatically deeded rejected properties

The foreclosed Boulder properties were first offered to the township in June before they went to auction. Accepting them would have made the township responsible for mowing and maintenance of the properties until they are sold.

Most of the properties on the unsold tax-reverted list are residential including one on Wyndcrest Drive in the upscale Lakeview on the River subdivision where existing homes are valued as high as $400,000.

The largest number of parcels were in the Utley Hills area including about 20 parcels each on Larchmont and Clairmont avenues.

Arlene Drive, Herrick Avenue and Utley Road are other streets with multiple listings.

The township board expressed interest in a Corunna Road parcel that would have provided a convenient parking lot for joggers, walkers and bikers using the new Genesee Valley Trail.

But that idea was nixed due to concerns that the lot might have underground storage tanks left over from when it was occupied by a gas station. The township would have to bear the expense to remove them, said Clerk Kim Courts.

If the board had chosen to accept any of the tax-reverted parcels, they would have been free of cost to the county treasurer.