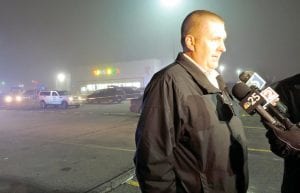 Lt. Jim Baldwin of the Flint Township Police Department briefed the media about a shooting in the parking lot of Toys R Us on Mondayevening.

FLINT TWP. — An 18-year-old Flint man has been arrested on charges of assault with intent to murder, after an altercation Monday evening in the parking lot of the Toys R Us store, 3250 Linden Road, in which another Flint man was shot.

At about 5:30 p.m. on Dec. 7, people responded to reports of multiple gunshots in the Toys R Us parking lot.

“There was an argument in the store, it led outside in the parking lot,’” said Lt. Jim Baldwin, in a press briefing at the scene.

“There were more words exchanged and then a succession of gunshots,” he said. Upon arrival, first responding officers were unable to locate any victims at Toys R Us. The 25-year-old victim had got into his car with his friends and left the scene, according to police reports.

Police later located him in the Sears parking lot across the street at Genesee Valley Mall shopping center.

“They drove to the parking lot at the mall and that’s where we found him,” Baldwin said. The victim was transported to Hurley Medical Center where he was treated for a leg wound and released. 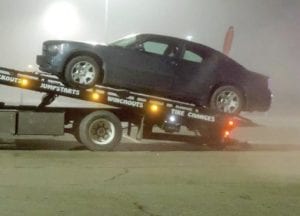 Wrapping up at about 8:30 p.m. Monday, a police officer escorted a wrecker driver who collected the victim’s car from the Sears parking lot.

The police investigation revealed that the victim and the 18-year-old suspect had a verbal disagreement in the parking lot of Toys R Us. The suspect produced a handgun and fired multiple times at the victim. One round struck the victim’s lower leg. No one else was hit by any bullets.

A second suspect, a 21-year-old Flint woman, turned herself in at the Flint Township Police Department. She was lodged at the county jail charged with Accessory After the Fact to a Felony.

Anyone with information regarding this incident is asked to contact Det. Alex Minto at the Flint Township Police Department, 810-600-3250.