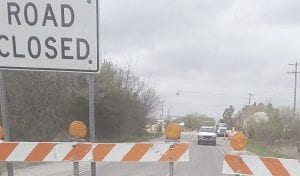 Work has begun on the new roundabout at the intersection of Grand Blanc and Morrish roads in Gaines Township. Photo by Lania Rocha

GAINES TOWNSHIP — Construction began Monday, May 4, on the new roundabout at the intersection of Grand Blanc and Morrish roads in Gaines Township.

Shoppers can still get to Isaac’s Grocery store, but “through traffic” is rerouted to Seymour, Baldwin, Linden and Hill roads. Although barricades are in place, access is allowed from the east on Grand Blanc Road and from the south on Morrish Road.

Work is expected to continue through July 31. The roundabout is the second to be constructed in the township – the other being located at Hill and Elms roads.

Construction Manager Garrad Godley said the new traffic circle will be paved in the center, as opposed to being filled with rocks like the Hill/Elms roundabout.

Motorists, particularly motorcyclists, have complained that the rocks often end up scattered across the roadways, causing safety hazards.

Eric Johnston, director of Engineering for the Genesee County Road Commission, said the county has submitted a proposal to the township to remove the rocks and pave the center of the Hill/Elms circle, and they’re just waiting for the township to commit to funding.

The cost of the Grand Blanc/Morrish traffic circle came in at $911,554 for construction, plus about $91,000 for engineering and inspections. About 90 percent of the construction funding will come from the Federal Highway Administration funds administered through the state Department of Transportation, Johnston said. The county will pay for engineering and inspections.

Because one leg of the four corners is considered a local road, as opposed to a primary road, the county and township will split the construction costs for that portion of the project.

That figures out to about $12,500 that the township will have to chip in.

The township Board of Trustees last year earmarked the money out of the township’s Act 51 allocation from the state. Act 51 money comes from the Federal Highway Administration, state fuel taxes and vehicle registration fees.

The Grand Blanc/Morrish project isn’t the only one that will send travelers the long way around in the township this year.

Johnston said construction was set to begin Tuesday, May 12, on the bridge over the Cargill Creek on Grand Blanc Road just east of Sheridan Road.

The county will pay for the full cost of the bridge work – Grand Blanc Road is a primary road, after all – which came in around $280,000. Traffic will be detoured to Byron Road in Shiawassee County, Lansing/Miller Road and Duffield Road.

The work involves replacing the existing bridge with an aluminum box culvert, at a “considerable cost savings” as compared to a traditional bridge reconstruction, Johnston said.

The project is expected to take four to six weeks.

In addition, the Genesee County Road Commission plans to build another roundabout – this one at Grand Blanc and Linden roads in Mundy Township – starting in August. The county will pay 100 percent of the cost because all four legs of the junction are primary roads.