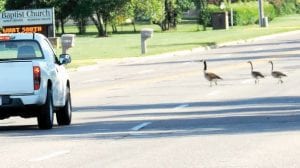 Maybe this gaggle of geese was just passing through but they were stopping traffic on busy Van Slyke Road last week.

FLINT TWP. — You could say that some motorists ran afoul while driving on Van Slyke Road, just south of Bristol Road last week.

The township is teeming with wildlife, but in what appears to be an unusual sighting, several large Canada geese came out of a thicket to cross Van Slyke Road to graze on the other side. Totally oblivious to oncoming traffic, they took their time goose-stepping across the 45 mph road as if they had a parade permit.

Drivers successfully braked without hitting any of the birds or each other. Geese have a reputation for making a nuisance of themselves in populated areas but regular drivers through that area apparently are not crying foul. Township officials said they have not received any complaints about the birds and were not aware of a problem there.

Giant Canada geese nest in every county in Michigan but are most prevalent in the southern third of the state, according to the Michigan Department of Natural Resources,

Though close to extinction at one time in Michigan, the goose count each spring has grown from about 9,000 in 1970 to more than 300,000 now, according to the DNR.

Canada geese still are federally protected by the Migratory Bird Treaty Act but can be legally hunted, with proper licenses, during the hunting season from September 1 into early February.

Adult geese have few predators, according to the DNR.

Most complaints are about goose droppings on lawns, beaches, docks, sidewalks, and golf courses. Sometimes geese will nest in shrubbery near a building or parking lot and become aggressive toward people entering the area. The big birds also can cause crop damage.

For a fee, the DNR coordinates annual goose round-ups but it is short-term solution, as the birds tend to migrate back to former nesting grounds.

Nuisance geese are trapped and relocated at the request of local residents or government units in late June and early July when the birds are molting and can’t fly. Some are killed and prepared by a licensed meat processor for distribution to soup kitchens to help feed needy people.

Some residents try non-lethal methods of dissuasion such as a dog to chase the birds away or by making the habitat less desirable.

Neither the DNR or township officials offered advice on how to handle geese in traffic. Stopping to allow them to cross safely is the humane response.

According to a recent news report, police in Clinton Township are currently trying to track down the driver of a SUV who witnesses said plowed through a gaggle of geese on Gratiot Avenue during rush hour on July 31, killing three and injuring several others.