Tragedy takes the wind out of Flushing’s sails 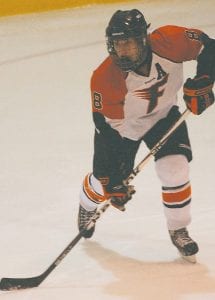 Flushing’s Blake Shafsnitz controlled the tempo on a possession.

DURAND — Having to do anything with high intensity the day you say goodbye to a friend is daunting for most adults, let alone high school kids.

The Flushing/Carman-Ainsworth hockey team played with a very heavy heart at the Durand invitational last Friday and Saturday after attending the funeral of a favored student-athlete who had passed away unexpectedly.

“We had quite a few guys playing with a heavy heart after attending the funeral of a fallen classmate,” said coach Jon Jepson. “Several were very close and played football with him and one of my players was his best friend. Their minds obviously were elsewhere, so I was good with the effort and maturity they showed under the circumstances.”

The Raiders were edged, 3-2, by Durand in Friday’s opening game. Durand scored at 6:41 when Evan Haller bent the net assisted by Luke Tunningley. Flushing got the equalizer at 2:55 when Mickey Montpas scored from Jordy Makrani. Durand had the answer however, at 1:08 when Garrett Gormley scored assisted by Luke Tonner.

Flushing again knotted the score with 25 seconds left in the second period when Makrani scored shorthanded and unassisted.

The third period would prove to be the difference as Durand scored with 38 seconds left when Shaun Meyer burned the net assisted by Jack Stone and Tonner.

Casey Bradshaw made 29 saves for Flushing and Durand’s goalie made 19 saves.

In Saturday’s consolation game, Flushing pulled out the 6-4 win over Freeland. Jepson said no one was particularly glad to be playing for the consolation title rather than the championship, but was pleased with how his boys came back emotionally to get the win.

Montpas scored at 10:20 assisted by Dan Olson on the power play to get things started. With 52 seconds left in the period, Makrani scored shorthanded, unassisted.

The back-and-forth play continued into the third with Montpas scoring at 12:36 with the assist going to Makrani and Nagy. Pollard got his fourth and final goal at 14:28 assisted by Nick Bailey and Matt Leland sealed the win for Flushing on an empty netter with 25 seconds left in regulation.

‘The kids came back in the consolation game and played well,” Jepson said. “Jacob Yencer played in goal this time and we put up 40 shots on goal.”