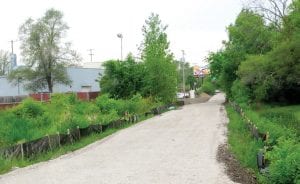 Construction has begun to link the eastern end of the Genesee Valley Trail to the City of Flint portion, which will follow the abandoned Canadian National railroad track bed from Corunna near Ballenger and end at Chevy Commons – a green space being developed on the former site of the Chevy in the Hole factory. As shown in the photo, the trail extension from Flint Township is being laid down behind McFall’s Collision, next door to the Burger King on Ballenger Highway, before crossing over into the City of Flint.