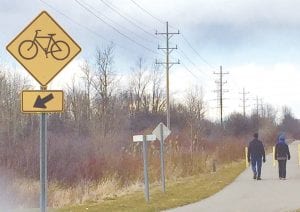 Cooler temperatures linger along with several rounds of light snow but not enough to deter some outdoor enthusiasts from a brrrrrrisk walk along the Genesee Valley Trail non-motorized recreation path which officially reopened on April 1. The three-mile-long trail is used year-round by some biking, running and walking diehards but officially is closed from December 1 through March 31.