Training to save lives using CPR 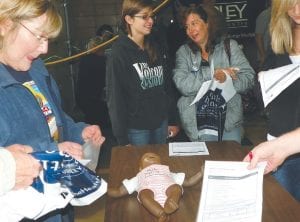 Deb Watchowski of Flushing (left) with a group getting ready to practice on an infant dummy.

FLUSHING — Deb Watchowski of Flushing will never forget a day in the late 1990s at the University of Michigan-Flint when a professor walked out of his classroom and collapsed in the lobby.

While others stood gawking and doing nothing, Watchowski dropped to his side and used CPR skills she’d learned about five years earlier. Unfortunately, it did not save the professor’s life (he died of a heart attack) but Watchoswki received a call from his widow thanking her for trying.

Memories like that are why Watchowski came with her husband Mike to the first annual free CPR training sponsored by Hurley Medical Center ER and STAT EMS held Friday at the Flushing Fire Department.

Watchowski said she wanted to take a refresher course, especially as she and her husband grow older and more likely to have medical needs.

“Teaching people the proper way to do CPR can make a difference,” said Joseph Karlichek, chief of operations, for STAT EMS. 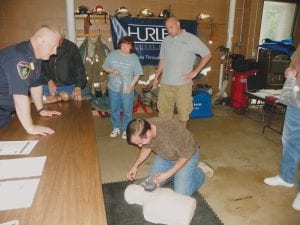 “Seconds count. Everyone here today will walk out of here knowing something about how to save a life.”

Karlichek said he was pleased by the interest shown and turnout for the event. About 35 people had to be turned away for lack of space but he said they hope to hold another session in August. STAT EMS also will be partnering with Hurley to offer training events in other communities throughout the year, he said.

Upon completion of Friday’s training, all participants earned a CPR basic certificate good for two years. About 80 percent were from Flushing.

Charles Sikorski of Flushing said he signed up for the training because “you never know when you’re going to need it.”

David Kidder of Flushing also thought he “might need it someday.” He recounted how a friend saved his life using the Heimlich Maneuver. That friend, who also took the CPR training Friday, performed the lifesaving emergency procedure when

Kidder began choking on his dinner.

“This training is similar,” Kidder said, “It saves lives. It would be a good feeling to save somebody’s life. You’d feel kind of dumb if you had the opportunity and couldn’t do it.”

The American Heart Association estimates that 250,000 people nationwide die from cardiac arrest outside of hospitals each year and that only 5 percent of such victims survive, according to a Hurley press release . Not all of those who collapse can be saved but the AHA reports if the survival rate improved only to 20 percent, in part due to