Transportation Day at TLC offers something for everyone 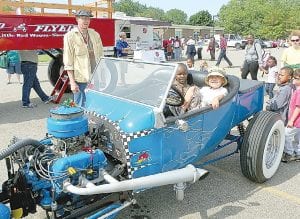 Above: Craig VanderKarr of Burton brought his 1923 Ford replica for the kids to have fun with. Left: This little guy was not too thrilled about being on fire truck, provided by the Flint Townshiop Fire Department.

FLINT TWP. — Milan Bowling, 3, a student at the Bendle/Carman- Ainsworth The Learning Community (TLC) on Scottwood Avenue had a choice between bringing his dad’s custom truck or car to his school.

So Anthony Bowling’s white and gold Corvette was among about 35 vehicles displayed in the school parking lot Friday for the 15th annual Transportation Day event.

TLC is the center for Head-start and other early childhood programs for kids up to five years old.

Little tykes like Milan got to climb into everything from a golf cart to a real Army helicopter flown in from Grand Ledge. They clambered aboard Humvees, fire trucks, ambulances, tractors, antique cars, semi-tractor trailers, motorbikes, RV’s and more. And what kid doesn’t love a Little Red Wagon especially one about eight-feet tall with huge tractor tires on it. 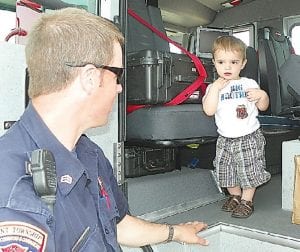 “He’s always built trucks and big tractors but this gets more attention than anything he’s ever built,” said his son Jeff Gardner of Goodrich, who had the pleasure of towing the eye-catching contraption down the freeway.

Gardner said they’ve had as many as 30 kids aboard at once. He was planning to show it off this week at a parade in Flushing and also will be taking it to Back to the Bricks this year.

Also popular with the kids was Craig Vanderkarr of Burton who brought his 1923 Ford Replica. Blue with a Road Runner decal on its fiberglass body, it’s Vanderkarr’s idea of an old-school hot rod. Vanderkarr said it took him 18 years to build it and he likes to show it off.

“My grandkids love it,” he said, as he hefted yet another eager toddler up into the driver’s seat.

Anthony Bowling also is a car buff who spent 12 years refining his Corvette and just put the finishing touches on it in April. As president of the Trendsettas Corvette Club of Flint, Bowling said he spearheaded the first annual Corvette Reunion at last year’s Back to the Bricks event. They are expecting 800 to 1000 Corvettes coming in for this year’s event, he said. 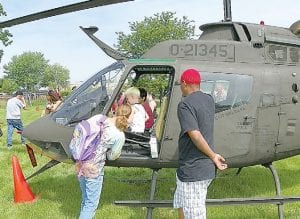 Kids lined up for a chance to sit in this Army helipcoper flown in from Grand Ledge for the 15th annual Transportation Day event.

Transportation Day at TLC is like a Back to the Bricks for children under 5 and their families but it is not advertised to the public because they can’t accommodate crowds, organizers said.

“We try to get as many vehicles as we can to give the kids a hands-on opportunity,” said Rod Reyes, one of the organizers. It’s held in conjunction with a resources fair to give parents something to do and to provide information about community programs such as the Safe Kids car seat program and the Food Bank.

“It’s a last hurrah at the end of the year,” Reyes said.