By Brandon Pope
By Lisa Paine 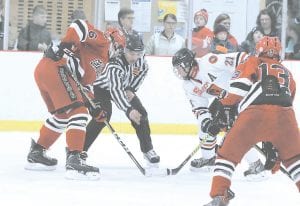 High school hockey continues to look different in the area as the years go by with teams falling by the wayside and new co-ops appearing. File photo

GENESEE COUNTY – If you’re familiar with the local high school hockey scene, then this is no surprise to you: Although highly expensive, travel hockey has become the route that many choose to help their child excel on the ice.

Travel hockey, if you can afford it, is the obvious option. It often provides a better level of competition, superior conditions and equipment, as well as a high level of exposure in terms of perhaps playing at the next level. It’s also a much longer “season.”

For those who don’t have those opportunities, house leagues and high school hockey are the only option. However, thanks to the extreme costs of hockey, coupled with so many kids opting for travel over school puck, many area high schools have struggled to keep a program together.

So why do parents choose travel hockey over house hockey and subsequently a middle school or high school program?

The CrossIcehockey program and many parents point out that travel hockey just isn’t an option, primarily because it costs several thousand dollars more than house hockey. Work schedules and other family dynamics also make this an improbability for kids. Travel teams not only travel within the country, but outside of it, too. That tips the scales for many parents because they can’t afford that aspect of travel and simply can’t be gone from their jobs for that many weekends to support their kids.

For families that do choose the travel hockey option, their main emphasis is on getting their kids more intense competition and the higher level of play that they just can’t get at the house level. Whether they are looking for their kids to land on a junior varsity, varsity, junior-level program or collegiate squad, they need that higher skill level and challenge so their kids aren’t sitting on the bench all season, especially given the expense.

CrossIceHockey also points out that travel hockey is a huge time and money commitment. While a typical high school season is usually 25 games, travel can be upwards of 80. That requires more days of practice sessions and plenty of in-state travel, putting kids in arenas at 8, 10, 11 p.m. For elementary and middle school-aged kids, that’s a major concern for families.

John Badal, Swartz Creek alum, former coach of the then-standalone Swartz Creek varsity hockey team and longtime alumni player, knows all too well the trials and tribulations of travel hockey. He’s a hockey dad to a 12-yearold and 10-year-old twins. The older plays for an AAA team in Lansing and the younger two often have to travel to Saginaw sometimes for practices. As his boys reach their tween years, Badal said he’s going to have to make decisions about their hockey careers. They are practicing at those late-evening hours when Badal would rather they be working on their homework and sleeping. It’s a sacrifice and choice parents make for the sake of youth hockey.

Badal felt that impact from both sides when he was coaching high school hockey. Parents couldn’t afford gear for their kids on one hand, and several players from his squads came off their travel teams because of the exorbitant cost to play for their high school team, actually helping Swartz Creek earn several regional titles.

“A lot has to do with the social dynamics,” explained Badal. “Now, the economy has been strained, both parents work, and there just is no time or money for kids. That’s a big impact of hockey in the area overall and why the numbers are down at the high schools.”

As far as why he chose the travel hockey option, Badal explained, “My kids are playing at a level that has them pushed more to keep them engaged. My oldest is a very good player. The best high school players are going to Powers (Flint Powers Catholic).”

Davison High coach Doug Towler knows all too well the choices parents make in regards to their kids and hockey. “I don’t recruit kids. I just don’t,” said Towler. “Our program speaks for itself. We see kids choose travel over high school, but I also have kids who choose high school and being a student over travel hockey. Cost is definitely a big factor in those choices.”

“Competition just isn’t there for the kids at many of the high schools,” added Badal. “And, just like we faced when I was coaching at the high school, when there is a shortage of, or no goalie, kids don’t want to play because they know without a good goalie the season isn’t going to be very good.”

Badal can also pinpoint when many of the high schools saw kids began choosing travel over their school’s programs, even though the latter was cheaper, even free in many instances.

“For what we experienced when it was just Swartz Creek, and at many of the other schools, School of Choice kicked in,” stressed Badal. “That’s when you saw kids playing for Grand Blanc, Davison, Powers. Also, city kids just don’t play hockey. Swartz Creek ran into that when I coached. So that will continue to impact what happens to the co-ops in the next couple years, too.”