Left: Renovation efforts are underway at the former Celebrations Nightclub on beecher Road.

FLINT TWP. —The former Celebrations nightclub in the down-onits luck Beech Tree Plaza on Beecher Road has been gutted and brought up to code and now anchors the rejuvenated strip mall with a new name and plans to become a wholesome entertainment venue catering to an older crowd and families.

The township Board of Trustees recently approved transfer of ownership of an escrowed Class C liquor license and dance and entertainment permits to Stafra Hospitality Inc. at 3503 Beecher Road.

The board heard a presentation about plans for the plaza from Stan Kalisek and Frank Lemek, the president and vice president, respectively of MGR, a professional electronics and audiovisual provider, who have been located at the plaza for five years and now own it.

Kalisek said they decided to buy the plaza after it went into foreclosure in March 2010 because they already have a significant investment there. Since closing the deal in Dec. 2010, they have been working to turnaround the 64,000 squarefoot plaza and to attract new tenants. 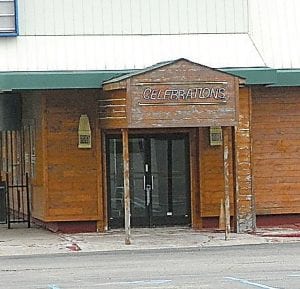 Below: What the exterior looked like a few weeks ago.

“ The plaza has been quite dormant, it had been sitting and been an eyesore for quite some time,’’ Kalisek said.

MGR and the Talk of the Town hair salon were the only remaining tenants in the plaza when they purchased it. Since they have leased about 13,500 square feet to a doctor’s office. A marketing farm has leased space in the lower level and STAT EMS has expressed interest in leasing 11,000 square feet to use as a training facility, Kalisek said.

In addition to its 1,500 square-foot original office, MGR is focusing on the 20,000 square-foot part of the plaza that formerly held Celebrations nightclub, which had a history of after-hours violence including a fatal shooting in the parking lot in 2006.

Kalisek said they are well aware of problems experienced by previous owners and are committed to making it a wholesome, family-oriented venue, targeting a 25 and older crowd.

Lemek said they have hired a professional security team headed up by Keith Roberts, a City, a retired Flint police officer. Roberts has already met with Flint Township Police Chief George Sippert and is implementing plans to keep people safe inside and outside of the building, he said, adding that it includes noise control, loitering and other nuisances that have drawn complaints from the surrounding neighborhood in the past.

MGR plans to use the former nightclub space as a showroom for their products when it is not being rented for banquets, wedding receptions, birthday parties, business meetings and other social gatherings.

“ We really are gearing it more towards an events center,” Lemek said. “ We are not a nightclub so we don’ t want that stigmatism.”

They also are looking at hosting events such as sports viewing, live bands, car shows, national recording artists, comedians, community fundraisers, Zumba fitness programs and ballroom dancing. Their business plan also considers potential food-service contracts with the McLaren Medical Center Proton Therapy being built down the road which is expected to draw patients from all over the world.

The restaurant and food service will be headed up by Nate Brown, whose cooking show “Chopping it Up with Chef Nate,’’ airs on Fox 66, according to the business plan presented to the township board.

Kalisek, a graduate of Carman- Ainsworth High School, and Lemek, a Flint Township resident, said they have a vested interest in seeing the plaza thrive.

Kalisek said they hope to “ bring it back to where it was when it was the original Beech Tree/Bosley’s when you could actually take a family and go there.”

“ We have a serious investment of over $2 million in the facility so we are not looking to get in and make a quick buck and leave,’’ he said.

Kalisek told the board they hoped to have the events center up and running by the end of October.