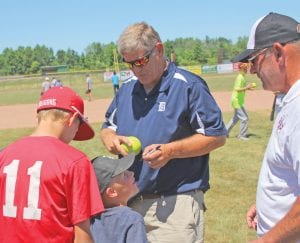 DAVISON – Rick Leach was only supposed to spend an hour with the kids in the OC Davison Summer Baseball Camp last Wednesday, as a favor to camp director and former teammate Ted Mahan.

But the legendary University of Michigan quarterback and 10-year veteran of major league baseball showed up 90 minutes early and spent 2 ½ hours there, signing autographs, talking with the kids, catching up with old friends and answering media questions for as long as they were asked.

Now retired and living in Petoskey, the 59-year-old Leach hasn’t forgotten that his rise to fame started in the youth baseball programs of Flint and a threesport career in football, basketball and baseball at Southwestern High in the early 1970s.

“I knew Teddy when I was 15 years old, played summer ball with him and later in college,” he said. “I’d do anything to help him.

“You get some professional athletes that say don’t get as involved, but Bo Schembecher and many influential people told me long ago, you can only keep what you have by giving it away. When I see these kids now, I remember when I was that age and people like Dave Bing were coming up, and Bill Freehan or Gates Brown from the Tigers. I think it’s entertaining for the kids, that they can relate to somebody that’s played at that level.” 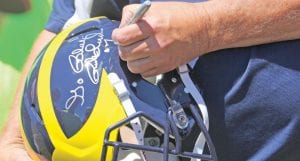 Leach kept the 40 or so campers entertained while signing one piece of athletic gear after another.

“You kids all have your own bats?” he joked. “Coach Mahan and I had two wooden bats that we shared with everybody. You don’t know what it’s like to pound nails into a cracked bat and tape it up.”

Still, Leach counts himself blessed to have had the opportunities that Flint offered in its heyday, when the economy flourished and the pioneering community schools program opened its doors to kids all over the city.

“Flint is so near and dear to my heart,” he said. “The amount of great teams that Flint has produced, the state champions, the amount of athletes that had national reputations. Flint was a hotbed for every recruiter around the country.

“To see what has happened to Flint, especially with the water situation, it broke my heart. I don’t care whose fault it was, just get it fixed. Take care of human people with human dignity.”

Like most UM fans, Leach is delighted to have Jim Harbaugh as coach, but he has a much closer connection. Jack Harbaugh was the Wolverines’ defensive backs coach when Leach was there, and the star quarterback played catch with little Jimmy and Johnny Harbaugh when they were 10, 11, 12 years old.

“When I left Michigan, his parents wrote my parents a letter talking about how much they appreciated the time and the friendship that I had with Jimmy at that age,” Leach said. “When I see him now, it’s almost like having my own son out there.”

Leach sees a lot of similarities between Harbaugh and Schembechler — in their personalities, the way they approach the game, their commitment, their drive.

“They’re different people, and I would never want to compare,” Leach said. “But I’ve told some of my close friends, if there’s ever a reincarnation of Bo Schembechler, it’s Jim Harbaugh.

“And I think he’s even taken it to a different level. Could I see Bo Schembechler doing 38 camps in 30 days around the country to teach kids and to promote Michigan and football? No.”

Leach was drafted out of college by both the Detroit Tigers and the Denver Broncos, and did consider playing in the NFL.

“I thought about it long and hard,” he said. “The main things were, I knew baseball people were looking at me. As far as the NFL, I wasn’t sure how people were going to view me, the style of offense we ran in college vs. what they do.

“Some teams had even talked to me about playing defensive back. I never played defense in high school or college. I just felt that I spent all my life preparing to be a quarterback and if they didn’t think they could look at me at that level in the NFL, I wasn’t interested. I had too many other options.”

In that vein, Leach was much like Michigan State’s Kirk Gibson, another football-baseball standout who was drafted in the first round by the Detroit Tigers a year before Leach was picked first. They became close friends as teammates.

“Kirk stood up at my wedding,” Leach told the kids. “So you see, Spartans and Wolverines can get along. Sometimes.”

Other highlights of Leach’s visit:

“Storm Davis of the Orioles was throwing a no-hitter at Detroit. I pinchhit in the ninth inning, and guess what I did.”

“Home run!” yelled the kids, at which Leach strutted back and forth with his arms raised.

“Playing for Toronto in 1987, we had a three-game lead on the Tigers with seven games to go. We didn’t win another game. We lost the last three in Detroit. Jimmy Key pitched a three-hitter in the final game and we lost 1-0 to Frank Tanana.”

• Telling the kids to look up “Rick Leach Joe Montana” on YouTube.

“You know Joe Montana? Four Super Bowl wins with the 49ers? I kicked his (butt).”

Twenty-six years after retiring from baseball, Leach is still regarded by some as the greatest athlete to come out of Flint, Mahan among them.

But Leach has his own favorite.

“First of all, I’m just grateful that my name is part of that group,” he said. “I’ve watched Brad VanPelt and Paul Krause. You think of all the great basketball players and football players.

“For my money, with the handicap that he dealt with and what he’s accomplished in his life, Jim Abbott is the greatest out of Flint in my book.

“I recruited Jim Abbott to Michigan.”