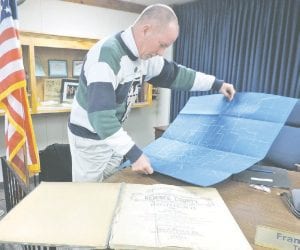 Flint Township now has its very own copy of a 1907 Standard Atlas of Genesee County, presented by Trustee Tom Klee.

FLINT TWP. — History buffs or researches interested in seeing what the county and township looked like more than 100 years ago can now find a handy resource at the Flint Township Hall.

A 1907 “Standard Atlas of Genesee County, Michigan,” has been added to the historical artifacts and keepsakes displayed in glass-front cabinets in the township hall auditorium. The book was presented to the township board by Tom Klee, a newly elected township trustee, who obtained it from the personal effects of Hod Morton, longtime owner of Pirates Park amusement center, who died in December.

Klee said that Morton took him under his wing as a son many years ago, after his own father passed away. The atlas turned up last summer as they were sorting through some of the memorabilia at the park, Klee said.

Morton asked that the historical artifact be donated to the township’s archives, he said.

“It’s a bit frail,” said Klee while showing some of the features inside the frayed book including an old map. Contents include plat maps of villages, townships and cities in Genesee County. Reading the fine print of the Flint Township map shows the names of landowners during that time. That includes Harlow Bristol, who is buried at the Bristol (South Flint) Cemetery on Bristol Road, just off I-75 in Flint Township, according to cemetery records. Similar documents can also be found in some area library collections. For an online version, see quod. lib.umich.edu/cgi/t/text/text-idx?c=micounty; idno=2933897.0001.001 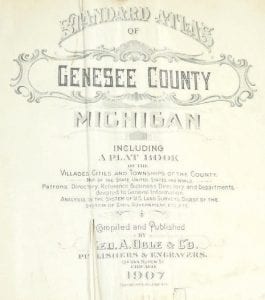