Try a taste of pickleball 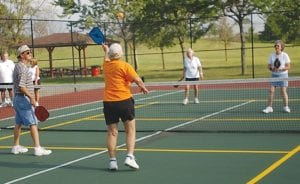 Jan Barber prepares to return the ball while teammate Ty Clarkson watches and opponents Sharon Jensen and Diane Meier await the volley during a pickleball game at Elms Road Park.

SWARTZ CREEK
— It’s a scaleddown version of tennis, with an oversized ping-pong paddle used to hit a whiffle ball that flies like a shuttlecock.

That’s a rough description of pickleball, a recreational sport that combines elements of tennis, table tennis, volleyball and badminton and has been growing nationwide for 45 years.

The game has taken root locally thanks to Jan Barber, a Swartz Creek resident who discovered pickleball in Florida two years ago and brought it home.

“We got it going here through friends and our walking group,” said Barber. “Anybody can play it. You’re using half the size of a tennis court and you don’t have to be athletic because the ball doesn’t go that far or that fast.”

The informal group has grown to about 25 people, some from Grand Blanc, Fenton and Mt. Morris. They show up for sessions at 10 a.m. Mondays, Wednesdays and Fridays or 6 p.m. Tuesdays and Thursdays, at either Elms Road Park or Swartz Creek Middle School. It’s gotten big enough that the city painted 44×20- foot pickleball courts on the two tennis courts at Elms. 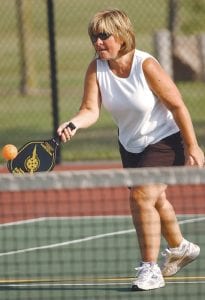 Dana Southwell underhands a return during a recent pickleball game at Elms Road Park in Swartz Creek. Southwell is among about 25 people who gather for the informal sessions of a game only recently introduced to the area.

Pickleball was invented in 1965 by U.S. Congressman Joel Pritchard, William Bell and Barney McCallum, all Washington state residents who wanted to provide a sport for their entire families. The name comes from a family dog, Pickles, who liked to chase the ball.

The game holds a natural appeal for retired folks and has become an official sport in some states’ Senior Olympics, including Michigan’s. But there are national tournaments for all age groups, and pickleball is being taught in school gym classes, including Swartz Creek.

LoAnn Russian learned of the game from a friend who played it in Hartland, another Michigan hotbed of pickleball. On this evening, she brought her husband, Jim, who picked up the game quickly as the Swartz Creek couple rallied from a 10-4 deficit to win, 12-10.

But no one keeps track of records or standings, and the doubles teams change partners regularly.

“At the end of the evening, I really don’t know how many games I’ve won or lost,” said Diane Meier of Clayton Twp. “I like the camaraderie. We laugh at each other, we laugh at ourselves and we encourage each other. Everybody that’s come to play has really been good sports.”

Meier has become a de facto secretary for the group, compiling an email list to inform players of schedule or site changes. The retired teacher is looking for a place to play in the winter, and they’re always looking for new players.

Anyone interested in joining the fun can contact Meier at 810-635- 7207 or dianemeier@aol.com (put pickleball in the subject field).