Trying out a different look 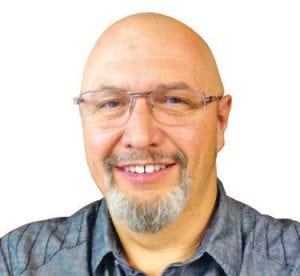 There’s no reason to adjust your eyeglasses. I didn’t use Photoshop and no, it’s not a broken printing press. My photo used for this column is accurate – I’m bald.

I wish there was a funny story about a dare or something similar I could tell you about my decision to shave my head, but there isn’t. I simply wanted to make a change. But I will admit, my thinning, graying hair with the growing bald spot on the back of my head was making me feel old.

When I was younger I liked my hair. It was thick and black and I wore it different ways over the years. The feathered look in the 80s, a mullet in the 90s and despite one failed attempt at growing it long when I was about 40 (my hair looked more like Shaggy from Scooby Doo) I’ve worn it clipped short ever since.

I asked my kids what they thought. Sam wasn’t thrilled with the idea of change, but he accepted it. Lucy said she thought it would be OK, but questioned why. When I explained I didn’t like that my hair was thinning she just said, “You’re such a girl.”

Anita was on board with the change. She said “you only live once” and we decided if I didn’t like it, it could be grown back in a matter of weeks.

So I went ahead and shaved it off. Anita used the clippers and I shaved off the rest with a razor. As the hair came off my head, it felt liberating – no more haircuts, no more bedhead, no more seeing the thinning hair on top of my head. It was gone. Of course, the new look isn’t without its shortfalls. I have to shave my head almost daily. Not sure how Yul Brenner or Telly Savales (famous bald guys for you millennials who probably don’t know who I’m talking about) did it every day.

Shaving usually entails at least one or two nicks which cause me to bleed and burn like heck when I splash aftershave on them.

The sun is a real problem too. Hats and sunblock are going to be necessities with the new look. First, however, I need a little color on my head. Forty-nine years of hair has done a pretty good job of making me look like a cue ball.

I’ve been able to joke about the new look too. I’ve compared my baldness to that of the character Walter White on the TV show Breaking Bad and Curley from the Three Stooges. Others have said I look like Telly Savales, that famous bald guy I mentioned earlier from the 1970s TV show Kojack. Emperor Ming from Flash Gordon and Uncle Fester from the Addams Family.

I’m not so opposed to Kojack or Ming, but Fester? Come on! I’d prefer to be compared with the likes of wrestlers turned actors like The Rock or Stone Cold Steve Austin – bald, tough guys. No, I get compared to the guy who use to make light bulbs glow by putting them in his mouth. ggould@mihomepaper.com