Tune-up is on the tee 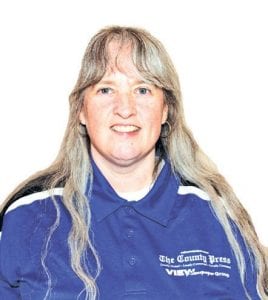 Fingers crossed for decent weather, area high school boys’ golf teams will get their first swings on a course this season at Friday’s Lapeer Tune-up.

Mother Nature is throwing everything left in her handbag at us this week and into Monday and Tuesday. Snow, sleet, freezing rain and a mix of the three are keeping 97 percent (my rough estimate) of teams inside.

Last year’s tournament was played under 75 degrees and sun. In past years a driving rain and bitter cold temperatures made the whole thing miserable for everyone, including us trying to keep our camera equipment dry. I looked at the 10-day forecast on Wednesday and Friday is supposed to be 56 degrees and partly sunny. As Lapeer coach Steve Stearns told our Dan Nilsen, “I’d be happy with 50.” Steve’s likely going to get his wish plus change. That’s one worry everyone can tuck into their golf bag along with the knit ski caps, rain suit and gloves. If that’s what spring is going to look like on April 15, we’ll all take it!

The Tune-Up, a very popular event every season, celebrates its Silver Anniversary. Twenty five years running, with just one canceled date because of weather, speaks well of the tournament, who runs it and who wants to play in it. A change in venue from the Lapeer Country Club to the Metamora Golf and Country Club also gives the golfers a set of new challenges. The change was put into place when Lapeer East and West consolidated. The decision was made to keep the girls’ team in the fall at the Lapeer Country Club and put the boys at their own facility in Metamora.

The field is expanding to 20 this time around and host Lapeer has a solid, strong lineup. They’ll need it with defending champs Goodrich bringing back four veterans off its regional-qualifying squad. Lapeer’s lineup includes Dylan Mullaney who last year as a freshman placed sixth overall. Eddie Brecht, Noah Jones, Gavin Beckwith, Eric McGeary and Scott Hilgendorf are all back from last year’s squad. Also in the mix, perhaps looking to match or better Mullaney’s finish last season is another freshman, Carson Butterfield.

Carman-Ainsworth graduated Haywood Petty, but returns five veterans. North Branch will have to decide which six it will bring to the party but the nod is likely to go to James Parker, who played last year. Others who could get the start include Josh Pasek, Issac Thomson, Brennan Bower, Hunter Gajda and Brendan Forster.

Kearsley lost its top golfer, Evan Flood to graduation, but Brian Sams, who just signed his national letter to play collegiate golf, will be in the mix, along with Kross Kenny, Tyler Phipps, Jack Vollmer and Conner Vansteenburg.

The field is loaded with other local and state powerhouses such as Frankenmuth, Midland Dow, Saginaw Heritage and Flint Powers, ranked No. 7 in Div. 3 in the latest pre-season rankings by the Michigan High School Golf Coaches Association.

Rankings don’t matter much except on paper at this point, though. It’s go-time for all the teams and it’s going to be exciting to see who comes out as individual medalist and overall team champion.