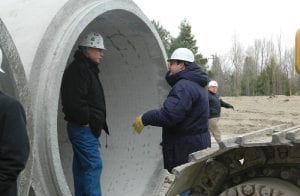 ST. CLAIR COUNTY — A tunneling machine arrived last week at the construction site for the Karegnondi Water Authority’s pipeline and will soon be burrowing under Lake Huron.

The machine is part of the plan to build a water pipeline from Lake Huron to Genesee County. It arrived Nov. 26 after being shipped by freighter from Germany to New York, then by truck overland through Canada to Michigan, said Genesee County Drain Commissioner Jeff Wright.

The $4.4 million machine was made specifically for the project, said officials.

It will be placed in a 56-foot deep hole near Lake Huron sometime this week and will begin tunneling underground.

Next spring, work will begin on digging approximately 80 miles of ditches, while steel piping for the water line will be made in Flint.

The $274 million project will become a new source of water for Sanilac, Lapeer and Genesee Counties. It is expected to be completed in early 2016. — G.G.