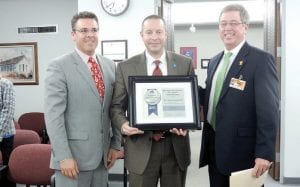 FLINT TWP. — Carman- Ainsworth Superintendent Steve Tunnicliff has been named 2015 Regional Superintendent of the Year by the Michigan Association of School Board Administrators (MASA) Region 5.

Timothy Stein, Region 5 president and superintendent of Flushing Schools accompanied by Eric Lieske, superintendent of Davison Community Schools, presented the award to Tunnicliff at the school board meeting last week.

The Regional Superintendent of the Year Award is presented annually by each of the nine MASA regions to an individual who has shown tremendous effort and dedication to enriching the lives of children and the community, according to a press release Stein read.

Stein praised Tunnicliff for his “inspirational leadership’ and said the award was well-deserved.

“Dr. Tunnicliff’s superintendency began during tough economic times, yet he was able to turn the district around financially without cutting programs for students. In fact, Carman-Ainsworth Community Schools is increasing programs offered to students.

His focus on educational leadership and commitment to celebrating diversity in the district is second to none.

“Dr. Tunnicliff is recognized as an education leader in the community and serves on numerous committees of the Genesee Intermediate School District, maintains relationship with the business community and established partnerships with local colleges to provide programs for students.”

Tunnicliff received a round of applause and further accolades from his staff and school board members.

School board president Gloria Nealy said: “Whether it is working with our administrative team to pursue a more transformational leadership approach, meeting with staff, or his day in the building at each school, these are just some of the examples of Dr. Tunnicliff’s leadership in the district. Steve has truly grown in his role as Superintendent and has far exceeded our expectations. I believe he has earned the privilege to be recognized for his many achievements on behalf of our students.”

In his humble acceptance remarks, Tunnicliff gave credit to his hardworking staff.

“I am honored by this award,” he said “I just come to work every day and we do what we can to make this a better place for our kids.”

Tunnicliff will also be recognized at the MASA Mid-winter Conference in Kalamazoo in January.