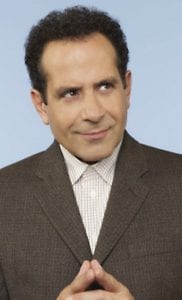 The Emmy, Golden Globe and Screen Actors Guild (SAG) award-winning actor will address the community at 12 p.m. April 8, in the auditorium of the Mott Memorial Building on the MCC main campus, located at 1401 E. Court St.

Shalhoub won three Emmy Awards and a Golden Globe for playing the title character in Monk. The series ended in 2009, after several successful seasons on air, with the Monk finale setting records as the most-watched basic cable original drama series telecast of all time. Shalhoub also has enjoyed a successful career as a character actor in a wide range of roles, including taxi cab driver Antonio Scarpacci in the hit television series Wings.

His numerous feature film credits include Spy Kids, Men in Black, Men in Black II, Galaxy Quest, The Siege, Searching for Bobby Fisher, Primary Colors, The Man Who Wasn’t There and Big Night. He was heard as the voice of Luigi in the hit film Cars. He just completed Too Big To Fail for HBO.

Shalhoub made his directorial debut with the independent film Made-Up, in which he co-starred with his wife, actress Brooke Adams. An accomplished stage actor, Shalhoub’s stage credits include Waiting for Godot, The Heidi Chronicles, Conversations with My Father and The Scene. Shalhoub was last seen starring on Broadway in Lend Me a Tenor.