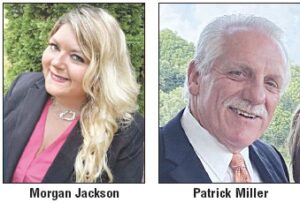 DAVISON TWP. — Two candidates have been appointed by their respective political parties to face-off in a special election Nov. 2 to be the next township clerk.

Patrick Miller, 69, the former treasurer of Davison Township, running as a Democrat, and resident Morgan Jackson, 29, a Republican, will both be on the ballot Nov. 2 for Davison Township clerk, running to finish out the remainder of former Clerk Mary Miller’s term.

Mary Miller resigned in June just six months into her first term as clerk due to her husband’s health. Despite several votes by the board, they were unable to reach a consensus on an appointee to fill the vacancy, so the matter had to be put to a vote.

Miller served for 16 years as Davison Township treasurer, losing his last re-election bid to Tim Green in the November 2020 election.

He said his accomplishments include maintaining and managing the services and funds of Davison Township by keeping a balanced budget. Keeping the township “debt” free while in office.

Expanding the services and opportunities of the township while keeping with in the budget. Making the office of treasurer a pleasant experience when help is needed and answers to questions desired.

Also, he said he was a 24/7 public official, not a part time treasurer, when he was in office.

Miller is retired from Will H. Hall & Son in Flint where he worked for 32 years as a carpenter. He was a member of the Michigan Council of Carpenters. He completed the UBC/ Mott Apprenticeship program in 1980.

Miller has lived in the Davison area for more than 42 years. He graduated from Michigan Municipal Treasurers Association Basic program in 2012, MMTA Advanced program in 2014 through Central Michigan University and Michigan Townships Association Governance Academy in 2015.

He also serves on the Davison Township ZBA and Planning Commission boards for more than 20 years as well as being an active board member of the Davison Chamber of Commerce. Prior community involvements are Genesee County Reserve Deputy of 10 years, obtaining rank of Lieutenant, served on Trustee board for Emmanuel Baptist Church for more than 40 years and has volunteered on construction projects worldwide through Construction for Worldwide Evangelism out of Tampa, Fl.

He said the reason he is running for clerk is because the board couldn’t decide on a successor for the vacancy in the clerk’s office.

“I’d seen some of the people possibly going to run and I didn’t think the ones out there were going to be adequate to do the job,” said Miller. “I know interworking of clerks position, having worked beside her the past 16 years. I have the experience to come in and keep position of clerk going without interruption because I want to keep the integrity of clerk’s position – that is paramount.”

He added he is not coming in with an agenda and hopes to work with the present board so people will not know there was a vacancy.

Morgan Jackson, a local businesswoman and administrative record keeper has announced she will be on the ballot as a Republican for the Davison Township Clerk special election in November.

Jackson said she enjoys calling Davison Township her home with her husband Dustin and three children. Jackson has a degree in administration and has spent her career working as an office manager in record keeping and processing insurance paperwork.

In addition to her degree, she said she earned her optimum certification in administration assistant through the Genesys PHO.

“My private sector clerical experience fits the duties to carry out the position of Davison Township Clerk and move the office forward on day one,” said Jackson.

She said she likes the current direction of the township under newly elected Supervisor Jim Slezak and Treasurer Tim Green with reducing wasteful spending and cleaning up the budget.

Jackson said she is ready to join the team to move the township forward.

“With all due respect to my opponent, Mr. Patrick Miller, he has had 20 years to run the township and the citizens voted him out in 2020 as the incumbent treasurer,” she said. “Now, he is seeking the Clerk seat. Haven’t we had enough of the musical chairs and recycled politicians on the town board?”

Jackson says her candidacy will offer the hardworking voters of Davison Township a fresh perspective on who is leading their local government. A perspective she says the voters made clear in 2020 when most of the incumbents lost, and a new board was elected.

In addition to volunteering in Davison Schools, and as a Sunday school teacher, Jackson also serves on the budget (as chair) and voter integrity committees for the Genesee County Republican Party.

“People have lost hope and confidence in our elections. I will clean it up and ensure one person equals one vote with full election integrity.” said Jackson.

In addition to fighting voter fraud, Jackson says she will look for new innovative ways to run the clerk’s office with new technology: making FOIA requests more accessible to the public and have an open-door policy to her office to listen to the residents’ concerns.

“Sometimes our leaders forget they work for the people, and I will put the residents of Davison Township first in every decision I make, and vote I cast on the township board,” said Jackson.

She said she is no stranger to public service. Her mother, Doneille Quinn, is an elected member of the Mount Morris Board of Education and her grandmother, Janet Couch, is an elected board member on the Mott Community College Board of Trustees.

“If elected your Township clerk, I will be a third-generation public servant and will lead with integrity, passion and determination for the people. Something my Mom and Grandma taught me.” Jackson said. Jackson said she has also received the endorsement of former Clerk Mary Miller and plans to meet with her to seek counsel.