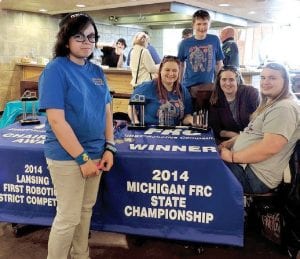 CAHS’ First Robotics Team served as guest grillers last week at bd’s Mongolian Grill as a fundraiser for their upcoming trip to the world competition.

Mo Peeps, Team 654, based at Rankin Elementary, won the Champions Award at the Michigan North and West First Lego League championship and placed first in the State

Last weekend, the team held a fundraiser at bd’s grill on Miller Road to raise funds towards $20,000 in trip expenses

In addition to monetary sponsors, Team 314’s needs include in-kind donations, supplies and equipment, a machining sponsor, engineers (active or retired), a 3-D printer and a heavy-duty standalone drill, she said.

MO Peeps, Team 654, competed within a field of 48 top teams from across the state to win the Champion’s Award, the most prestigious award of the FIRST (For Inspiration and Recognition of Science and Technology) robotics competition.

Festival in St. Louis, where they will among teams representing other states as well as 35 countries.