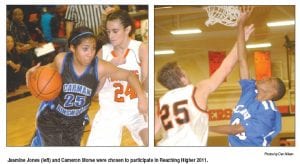 SOUTH LYON — Two Carman-Ainsworth basketball players got a special opportunity to catch the eye of college recruiters this month.

Jasmine Jones and Cameron Morse both were nominated by their coaches and chosen by a committee to participate in the Reaching Higher prep basketball experience at South Lyon High.

The NCAA-approved event is a joint effort of the Michigan High School Athletic Association and the Basketball Coaches Association of Michigan to provide a safe, inexpensive, educational environment to those who may have potential to play intercollegiate basketball at some level.

Jones was selected to take part in the girls’ showcase last Saturday, while Morse is scheduled to participate in the boys’ event this Sunday.

Reaching Higher was established as an answer to widespread opinion that amateur basketball is out of control in America, that it operates too much outside of school/college control and in the hands of corporate interests and unregulated agents. This event provides each student-athlete an understanding of what it takes to succeed academically, athletically and socially at the college level.

“Reaching Higher 2010 exceeded our expectations,” said BCAM executive director Tom Hursey. “ We thought it would be a good event. It turned out to be a great event. The MHSAA and BCAM have combined their resources to host what might be the best showcase in the country.”

The day starts at 9 a.m. with NOAH shooting analysis and measurements of height, weight, reach and wingspan. After a couple of brief speeches, players stretch and flex under a certified trainer and begin basketball station work, focusing on shooting off the pass, offensive and defensive transition and a WNBA or NBA pre-draft measuring station. Parents, meanwhile, receive a presentation in the cafeteria on “Realities of Recruiting.”

Players are then divided into teams and have a 15-minute practice session before playing three sessions of games from noon-4 p.m., with the teams alternating a lunch hour. The day ends with another brief speech followed by evaluation by coaches and NOAH analysis.

“ The Reaching Higher showcase was a wonderful opportunity for players to learn from various coaches around the state and gain exposure to college coaches,” said Katrina A. Masters, a former high school state champion from Saginaw Heritage who went on to play for Michigan State’s NCAA runner-up team. “I only wish there was an event like this when I was in high school.”