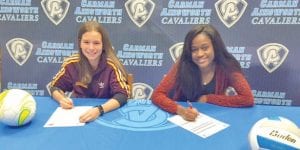 “It gives me the chance to be close to my family,” Cunningham said.

Cunningham knows that the transition to college will have its challenges and that it will be important to manage her time wisely.

“Balancing out how to be an athlete and still focus on school will be a challenge,” she said.

Cunningham will major in biology. And while she’s a bit apprehensive about going to college, she is also looking forward to it.

“I’m nervous about making friends, but I am excited to meet new people,” she said.

Cunningham has been playing volleyball since the seventh grade. She has also played club volleyball for the Arsenal Team. Cunningham knows she wouldn’t be where she is without the help of others. She knows other people have provided support along the way.

“I would like to thank my parents and my team for being a good support system,” she said.

Johnson decided on Concordia after looking at other schools such as Robert Morris and St. Mary of Notre Dame. She chose Concordia over the other schools for a number of different reasons.

Johnson liked the size of the school, the location, the entire campus and its soccer team. Johnson will major in business.

Johnson believes that women’s sports have become just as important as men’s sports. She thinks sports can be just as influential for women and it is for men.

Johnson will play right away for Concordia. She may not start, but she will definitely see time on the court.

“I was told by the coach I would have an immediate impact starting this fall,” she said.

Johnson has three people who have played important roles in her development. She knows without those three she may not have made it to the collegiate level.

“I like to thank my mom, my trainer Subir and my travel coach Dan Dalzochio,” Johnson said.