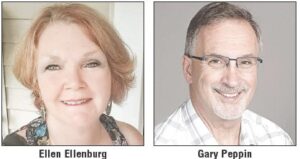 BURTON — Genesee County Commissioners Ellen Ellenburg, D-Burton, and Gary Peppin, D-Davison are the target of a recall attempt after voting against a special meeting to allow residents to discuss a mask mandate for K-6 students.

The meeting was to allow residents to discuss the mask mandate with Dr. Pamela Hackert, Medical Health Officer with the Genesee County Health Department.

The recall language was filed Aug. 26 by Burton resident Katharine Keller, who contends Ellenburg acted to prevent the people from the community to speak out regarding the mask mandate by voting against the special meeting.

Recall language against Peppin was filed by Leonard Marden of Richfield Township, included the same reason regarding the special meeting vote, also for Peppin voting to approve the county’s 2021-22 budget with a deficit and for voting against a motion for the county board to add an item to its agenda on vaccine passports.

If language is approved those who are circulating the petitions will need to collect the signatures of at least 25 percent of those who voted in the last gubernatorial election in each commission district to force a recall election.

The election commission will consider the recall language on Sept. 14, at 8:30 a.m. in the 7th Circuit Court House, Judge Jennie Barkey’s court room.

Neither Ellenburg nor Peppin returned a call for a comment.