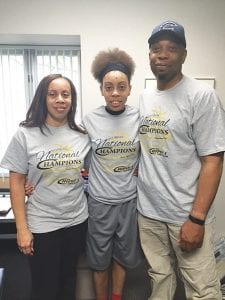 Sydnee McDonald had her mother, Lisa McDonald, and uncle, Brian Johnson, on hand for her signing.

FLINT TWP. – The top two players on Carman- Ainsworth’s girls’ basketball team will continue their game in college next year.

Sydnee McDonald, the Most Valuable Player in the Saginaw Valley League-South last winter, will attend Chipola College in Florida, and Natalia Kincaid will play at Lansing Community College. They signed their letters of intent in a ceremony at the school April 20.

Both players are 5-foot-9 guard/forwards who were selected to the Associated Press Class A All-State team, McDonald as a first-teamer and Kincaid as an honorable mention pick.

McDonald also had interest from Div. I schools Central Michigan, Eastern Michigan, and Illinois State, and hopes to play at that level eventually. 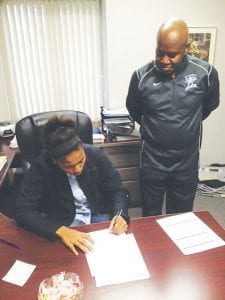 Natalia Kincaid signs her letter of intent as Lansing Community College coach Ervin Brunson looks on during the April 20 ceremony at Carman-Ainsworth.

But that wasn’t the only reason McDonald was drawn to the small school in Marianna, a town of 10,000 in the Florida Panhandle 70 miles west of Tallahassee.

“I like how it was peaceful and quiet, and I love the weather,” she said. “The team is a big family and they’re supportive. I feel like I’ll stay focused there.”

Chipola is losing seven sophomores off its 10-player roster, including 6-foot-3 center Evelyn Akhator, who set NJCAA records with 545 rebounds this season and 956 for her career.

Kincaid also had interest from a community college in Des Moines, Iowa, and had verbally committed to Delta College. She switched to Lansing for academic reasons.

“Lansing offered 15 credits,” said Kincaid, who wants to enter a pre-med program with an eye on a career in radiology. “To be a transferring junior, you have to have 56 credits.”

Kincaid is already looking at Div. III four-year schools from Maine to California, including colleges in New York, Minnesota, Nebraska, Kansas and Utah.