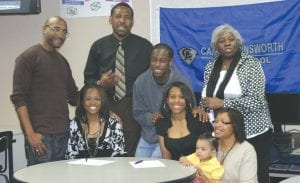 FLINT TOWNSHIP — The Carman-Ainsworth track program is often held in the highest regard when it comes to competition within the state. The Cavaliers have produced plenty of big names and have sent several athletes onto compete at the collegiate level. That legacy was added to on Monday when a press conference was held to announce the collegiate signings of Jalesia Johnson and Lariah Simpson.

Johnson, who also runs cross country in the fall, and indoor track in the winter, signed her national letter-of-intent to run for Siena Heights University next season. Johnson chose Siena Heights over Saginaw Valley State, and Albion College. Johnson proclaimed that the environment at Siena Heights really sold her on the school.

Although excited, Johnson admits that her biggest difficulty in college may be the distance from home. “I think my biggest challenge is just that it will be different for me to be on my own,” added Johnson. “Just being on my own and knowing that my parents aren’t there. I’ve always been independent, but knowing that I just can’t run and turn to them. It’s the real world.”

Not only will she be continuing her athletic career at Siena Heights, but she will also be majoring in pre-med, with a minor in special education. All-in-all, Johnson is happy to pursue her dream. “I’m excited that I’m able to run,” stated Johnson. “I love to run, that’s my passion, and to be able to continue that is a blessing. I would like to thank God, my family and my coaches.”

Lariah Simpson will be taking her abilities to Indiana Tech next season.

“I chose Indiana Tech because it had a good program,” commented Simpson. “The coaches there really reached out to me and gave me many opportunities. They offered me many scholarships, one for academics, and one for athletics, so I was truly blessed.”

The future psychology major looked at going elsewhere, but didn’t like how the other environments compared to what she experienced at Indiana Tech. “I did consider some other schools,” added Simpson. “But the family lifestyle they have at Indiana Tech really drew me into there, so I think Indiana Tech University is where I want to be.”

Just as her teammate, the main concern as Simpson heads off to school is the distance from home.

“My biggest challenge will be moving away from my family. I do know that I will become homesick, but hopefully I will break out of that and become my own person, a young adult, and make my own decisions.”

Simpson strives to accomplish just as much at Indiana Tech as she did at Carman-Ainsworth.

“I just hope I do good in track and field and make everyone there proud of me, just like I made people here proud of me,” concluded Simpson. “I just want to thank Carman-Ainsworth, the faculty, my parents, and the adults in my life that really drove me and pushed me to accomplish these things in life, because without them and without God, I don’t know where I would have ended up.”