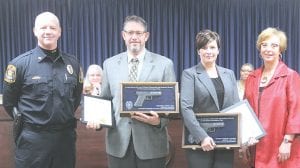 FLINT TWP. — Two Flint Township Police officers, each with 25 years of service, were honored March 2 as they officially left the department to enjoy their retirement.

Sgt. James Daly and Ofc. Janelle Stokes were both recognized for their years of service to Flint Township and were presented with proclamations from the Board of Trustees, as well as their service pistols presented in collector case.

Daly was most recently assigned as a road patrol sergeant, playing what Chief Kevin Salter called “an integral part in the day-to-day operations in the patrol division.”

He served in a variety of assignments throughout his career, including Genesee Valley Mall officer, detective, patrol sergeant and administrative sergeant.

“This is one of the things as the chief of police I enjoy doing. We have two individuals here tonight, who have served this community for over 25 years,” said Salter. “In our profession, that’s a long time.”

He said Daly served the department from 1994-2020 and was, in addition to being a patrol officer, a detective in county’s FANG drug unit and GAIN auto theft unit.

“When Jim was working, I knew he’d do the right thing,” said Salter.

The proclamation for Stokes indicated she was a road patrol officer, detective, school resource officer, field training officer and a hostage negotiator. She was also known for having a positive attitude and dedication to her profession.

Stokes received a unit citation for professional excellence and a life-saving citation.

“As a brand-new officer here, Janelle was one of my (training officers), and she taught me the passion of law enforcement you’ve got to have for this, and the pride you have to have,” said Salter. “It’s been great working with you. I appreciate all you taught me.”