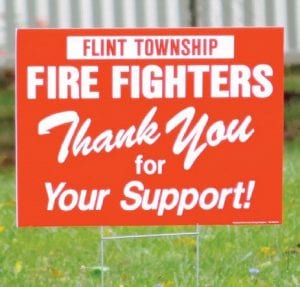 Leading up to the November election, these yard signs from the fire department have been placed around the township.

FLINT TWP. — Township voters will be asked to renew two millages in the November 3 election. One is a fiveyear renewal for fire equipment and the other is a ten-year renewal for road maintenance.

If not renewed, both millages will expire at the end of the year.

If renewed, the .50 mill Road Millage will be extended through 2025 and provide ongoing maintenance for township roads. Township residents would continue to pay 50 cents on each $1,000 of taxable value of property. The levy would generate about $399,200 in its first year.

The .25 Fire Equipment millage will be extended to 2020 and provide funding for equipment and rescue suits for township firefighters. It costs property owners 25 cents for each $1,000 of taxable value. The first year levy is estimated at $199,600.

Campaigns are underway to urge voters to renew both millages.

Voters narrowly turned down the road millage in the May election with 2,529 residents opposed to 2,407 in favor.

“We have spent money all over the township … by recommendation of the Road Advisory Committee,” said Township Supervisor Karyn Miller.

The Fire Equipment Millage renewal would pay for firefighting needs including trucks and protective gear.

“Fire equipment is not cheap but is needed to operate the fire department and keep the public and fire fighters safe,” said Assistant Fire Chief Mike Burkley.

Equipment needs in the next five years include new engines in 2016, 2017 and 2019 at a cost of $450,000 each, according to a planned purchase schedule that is available for public viewing at Fire Station No. 1 on Reuben Street.

Fire trucks are the biggest expense for the department, Burkley said.

Also, air packs last about 15 years and will need replacing in 2017, he said.