Two of the local gas stations that are closed and essentially abandoned in nearby Swartz Creek at, right, at 5012 Holland & Miller Station and above, the old Marathon on Miller Road that will soon have a new resident.

City Manager Paul Bueche mentioned at last Monday’s city council meeting the BP on Morrish Road and I-69 closed and said that they owe an “outrageous amount” in water and sewer bills.

Bueche described these gas stations as being “a party store that sells gas,” for reasons they cannot remain afloat.

“The companies that own them drive the gas prices,” said Bueche. He said they lose money on gas and depend on floor space to sell conveniences to make up for it and charging 30-40 cents more a gallon than the stations a mile further is the reason for their demise.

The other gas station at 5012 Holland and Miller Road has been closed and in its third year of the tax foreclosure process.

“I’m certain the bank is gonna walk away from it (Miller Road station) and we’re going to work and try to get that one, and then we’re going to see if we can accelerate –just to keep them all together—the one on Morrish and 69 if it gets to leading down the same path, as I suspect it will,” Bueche said in his efforts to alleviate vacant buildings in the city. 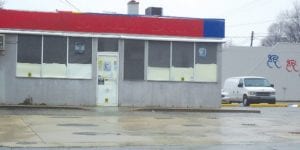 “Our hands are tied (financially) for what we can do,” said Bueche in regard to keeping the city alive. He said the Marathon station remained an “eye sore” for about 12 years before they were able to do something, and hopes efforts for these other two gas stations will prevent a similar situation from happening.