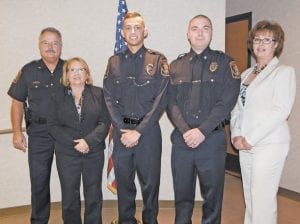 FLINT TWP. — Moving forward toward a goal to get the police department up to full force of 45 officers, two new officers were sworn in last Wednesday.

They are Nicholas Pohl and Tyler Stambaugh.

Stambaugh is a 2011 graduate of Goodrich High School, earned an associate’s degree in criminal justice in 2015 at Mott Community College and a bachelor’s degree in criminal justice at Ferris State University in 2016. He graduated from the Oakland Police Academy this year and was working as a part-time officer for Dryden Township, Chief Sippert said.

Both officers will begin field training immediately, he said.

Chief Sippert also announced that the Civil Service Commission has decided to allow the department to accept applications continuously. In the past, the recruitment period was set for about a month.

So far Pohl and Stambaugh are the only two applicants to make it through the most recent recruitment period that ended in mid-June. Of 28 applicants, only 16 passed a written test, 14 of those showed up for an interview and eight survived that phase but still faced background checks and physical tests.

Chief Sippert has been working to increase the size of the force since passage of a Public Safety Millage in November 2014 that provided funding for more officers. Six new recruits were hired in March of this year.

The township Civil Service Commission has conducted four entry level testing processes in the past two years to establish a list of candidates.

“We are almost through our list again and we would like more applicants,” Chief Sippert said. The openings will be advertised in the newspaper and online, he said. He also encouraged residents to help spread the word to anyone interested in becoming an officer.

Applications also can be picked up in person the police department or at the township administration building.

Finding qualified officers is an ongoing problem locally and nationally, Chief Sippert said. Flint Township has six openings and a seventh one coming up in January due to a pending retirement, he said.