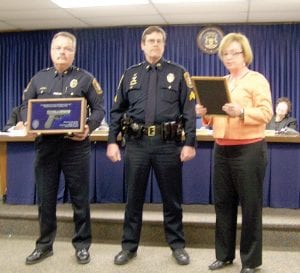 FLINT TWP. — The Flint Township Board of Trustees said good-bye to two retiring police officers and promoted a third to the rank of sergeant at its meeting Monday night.

The board unanimously approved the promotion of James Daly to sergeant. His name was submitted by the Civil Service Commission as the next officer eligible for promotion. Daly has been with the department 16 1/2 years and has served on the road patrol, at Genesee Valley mall for six months, on the Flint Area Narcotics Group (FANG) unit for almost two years, on the gang unit for over two years and in the detective bureau for more than five years. He is a 1992 graduate of the Washtenaw Police Academy and also has a bachelor of science degree in criminal justice from Eastern Michigan University. He is married with two sons.

Hovey, who was not present, was lauded for 25 years of credited service including assignments as a patrol officer, field training officer and motorcycle officer. He has received numerous service awards including the Medal of Valor and Police Heart Award for an incident in which he was shot by a violent armed resident. He returned to full duty after overcoming enormous obstacles to recover from his wounds, the proclamation stated.

Also retiring after 25 years of service, Siebel was cited as an active leader and instructor of firearms, defensive tactics and use of force. He has been a detective and most recently served as the road patrol supervisor. He was a member of the Honor Guard and Tactical Unit and was one of the police officers deployed to New York City after the 911 terrorist attacks in 2001. Seibel also served his country in operations Desert Storm and Enduring Freedom as a member of the Air National Guard, 127th Air Wing-Security Forces. He has earned the Distinguished Service Award and many other service awards and professional citations.