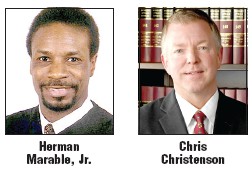 Here’s what the candidates had to say in response to the View’s questionnaire:

Tell us what your goals are for the community if elected? I served as a prosecutor for 9 years, and I have been a District Judge in Genesee County for the last 20 years. I have more experience than my opponent, and all but two current Circuit Judges. I will bring experience, fairness, commitment, integrity, and diligence to the Circuit Court bench. Making fair decisions as a judge is truly a skill that takes years to develop. I will not have to “learn” how to be a judge. I have been fully engaged in the community, and that connection has made me a better and more effective judge.

I will bring my award winning, self-funded Student of the Month/Year mentoring/scholarship program (established in 2004) to encourage high school students to focus on educational and career goals. Community improvement and crime prevention begins with educating and investing in our youth.

As a lifelong city of Flint resident, I am concerned that for the first time ever, there are no judges who live in Flint (our largest city) on the Genesee County Circuit Court. The entire county should be represented at the table.

Our courts are dealing with the new reality of operating during a pandemic and recession. With backlogged dockets; reduced capacities to operate; and future budget cuts to come, our citizens deserve tested, and proven judges who are experienced in administering justice under adverse conditions. Virtual technology, and other tools are a part of the new reality. COVID is a watershed event that will impact our courts indefinitely.

Accomplishments: I have been an attorney for over 20 years, a lifelong Genesee County resident. Over the past 20 years I have had extensive experience in all areas of the law relating to the Circuit Court and have appeared before each and every Circuit Court Judge in Genesee County. These cases have included both Criminal and Civil law, dealing with wide ranging, complex issues: from real estate, elder law, bankruptcy, business law, probate law, and criminal cases including several murder trials. Our next Circuit Court Judge must have a high level of understanding in each and every one of these areas.

Tell us what your goals are for the community if elected? During my career I have fought to protect our most vulnerable loved ones, especially our elderly. As your judge, I will be dedicated to protecting our seniors from the predators who commit physical abuse and financial exploitation.

I will also use my experience and platform to help our youth who are fighting drug and opioid addiction. I have seen first-hand, lives being destroyed. I have seen addiction cross generational lines. I will work with leaders and experts in our community to develop and strengthen drug outreach and diversion programs. Together we will work to break the cycle plaguing so many of our families and get help to those who need it BEFORE they commit more serious crimes.

The Genesee County View will run more candidate profiles next week for the various races through the county.