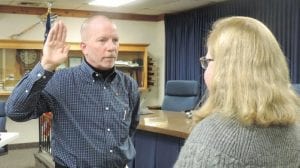 Tom Klee has been sworn in as township Fire Commissioner making it the first time the position has been filled in at least a decade.

FLINT TWP. — For the first time in at least ten years, the township has a Fire Commissioner.

New township board trustee Tom Klee was unanimously appointed to the position, effective immediately. He abstained from the 6-0 vote.

A Fire Commissioner’s responsibility is to act as a liaison between the township board and firefighters, said Supervisor Karyn Miller. He discusses problems with the fire chief, takes grievances and reduces the confusion of having every board member involved in fire business.

Klee’s appointment was one of several approved by the township board Monday night.

Named to the Board of Review were Jim Rouse and Marsha Binelli, both to terms expiring January 2019. Township Supervisor Karyn Miller said she had asked a local attorney about filling the third spot on the panel but is waiting for his response. If he agrees, his name will be presented at a future board meeting.

Miller submitted a list of names for review and she said that she is actively seeking nominations for people to serve on the township’s Economic Development Corporation. Terms range from one to six years on the eight-member board.

There are three open seats on the panel which in recent years has met only once annually, due to lack of funding. But Miller said she is hoping to “jumpstart” economic development in the township. Interested residents can be trained, she said. She said she would like to see the panel have enough business for quarterly or monthly meetings.