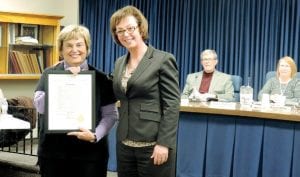 FLINT TWP. — Words of praise and gratitude keep on coming for Peggy Anderson, who retired from the Carman- Ainsworth School Board in December after nearly 22 years of service.

At its Monday night meeting, the Township Board presented a proclamation to Anderson, acknowledging her as “an exemplary citizen and a devoted public servant.”

Read aloud by Supervisor Karyn Miller on behalf of the board, the proclamation touched on many highlights of Anderson’s tenure including that she:

• Dedicated her professional life to education by first serving as a teacher for Flint Community Schools;

• Served the parents and students of Carman-Ainsworth School District from July 1993 to December 2014;

• Saw many changes take place during her tenure as a Carman- Ainsworth School Board Member, from the early days of computers in the classroom to maintaining a full academic program even with devastating cuts in school funding;

• Contributed to the community by serving as President of the Flint Township Carman-Ainsworth Senior Citizens Governing Board for many years.

The proclamation acknowledged Anderson as a devoted wife, mother and grandmother and an “able, thoughtful, and dedicated school board member who served Carman-Ainsworth School District with the utmost professionalism.”

“Peggy Anderson always acted on behalf of the students to do what she termed the ‘right thing.’