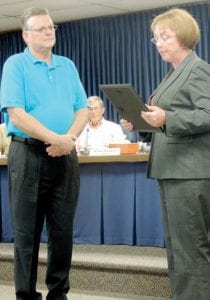 FLINT TWP. — James Huffman, who served at a township trustee from 1968 to 1976, was honored by the township board with a proclamation and tribute at its Monday night meeting. Huffman died June 19 at age 92.

In a proclamation presented to his son, David Huffman, who serves on the township road advisory committee, Huffman was praised for a lifelong devotion to education and public service. A professor at GMI Institute (now Kettering University) for more than 45 years, Huffman also worked with numerous community groups including the Flint Area Council of Churches, Court Street United Methodist Church, Flint Kiwanis, the Flint Symphony Orchestra, Beta Theta Pi, Boy Scouts of America, and the Junior St. Cecelia Society.

As a township trustee, Huffman played a key role in the planning and construction in 1976 of the Flint Township Community Center, now known as the Albert Lavelle Auditorium. He was instrumental in the development of Flint Township’s infrastructure including the installation of sanitary sewer and water lines into residential areas and was an advocate for the “Spirit of ‘76” Bridge that provided easy access to and from the northern areas of the county into Flint Township. 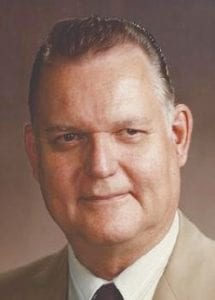 During a time of financial difficulty for the township, Huffman waived payment of his trustee salary so that uniforms could be purchased for the police department.

Huffman held a doctorate degree and was awarded a Rodes Professorship in 1978, an honor conferred upon a Kettering faculty member in recognition of scholarly achievement.

He proudly served his country during World War II as a Captain in the Army Air Force in the Pacific Theater and was awarded the Distinguished Flying Cross for his role as a flight navigator in guiding a squadron of planes in the Philippines.

He and his wife Martha, who died in 2005, had two children David Huffman and Ann Palentyn, and three grandchildren.

Reminiscences also were shared by Trustee George Menoutes, who served with Huffman in the 1970s; Larry Ford, chairman of the township Planning Commission, Henry Hatter, a fellow Republican Party member and David Arceo of the Genesee County Road Commission.

Menoutes hailed him as a Republican who got along with Democrats.

“If you could have met him and worked with him, he was a very sincere person,” Menoutes said. “He worked with a board that was four Democrats and three Republicans and they all worked hand in hand together.”

Ford said he was humbled by the kindness Huffman showed him as a teen and later as a adult. Huffman was the kind of man who took young people under his wing, he said.

Henry Hatter, former chairman of the Genesee County Republican Party, also praised Huffman as a mentor and a “great American.”

Arceo said he appreciated that Huffman treated everyone including him as an equal. He also recalled lesser-known facts about him including that he held a doctorate degree and was an avid trumpet player.