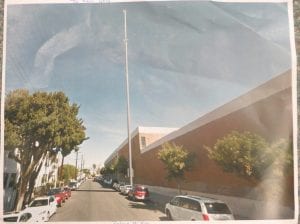 This sample photo is of a pole located elsewhere.

FLINT TWP. — The township board unanimously opposed an application from Mobilities LLC of California to build seven cellphone tower poles on right of ways in the township.

The application is filed under the Metro Act, a state law enacted in 2002 to help telecommunication providers in cutting through red tape to obtain permits without having to pay excessive fees or endure long delays. A response is required from the affected municipality within 45 days to avoid fines of up to $40,000 a day.

Township Clerk Kim Courts said the application raised some concerns that were communicated to Mobilities representative in Chicago. He responded that the township should proceed with processing the application as is, and if rejected, Mobilities would resubmit a revised plan at a later date. 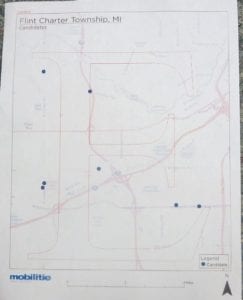 A map submitted with the application identified seven proposed tower locations in the township.

Mobilities is proposing installation of what it calls “small cell” facilities, which are low-powered, compact and consist of no ground equipment so that they can be “safely and conveniently located in .. dense and congested areas.” A sample photo of an existing tower located elsewhere is of a tall flagstafflike pole. The height of the poles was not stated. However a provided “candidates” map indicated proposed locations near I-75 and Beecher Road, two near Bristol Road east of I-75; one near Linden Road in the northwest quadrant of the township; one north of Miller Road near I-75 and two west of Linden Road in the vicinity of the Genesee Valley Center shopping mall. At least half of the proposed poles are in the flight path and will not pass FAA approval, according to Tracey Tucker, township building and economic enhancement director.

Township Supervisor said the board’s unanimous decision rejecting the application would be formally submitted to the Michigan Public Service Commission in Lansing as required by law.