Twp. board spars over sales of tax-reverted properties 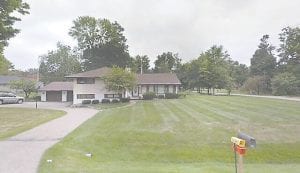 The unpublicized sale of this tax-reverted house in Western Hills caused disagreement among township board members.

FLINT TWP. — Despite no takers at two county auctions, a house at 6184 Mapleridge Drive became the subject of a bidding battle, so to speak, at a recent township board meeting.

The Western Hills home is one of 11 tax reverted properties presented to the board for disposition including sale or demolition. In a new blight control strategy, the township took ownership of the properties, after the failed to sell at auction, instead of allowing them to be taken over by the Genesee County Landbank.

Treasurer Lisa Anderson objected to the proposed sell, saying she preferred to see it go through a public bidding process open to any interested buyers. She also inquired about a land disposition policy, Miller presented a few months ago, that was rejected by the board. It sought to establish rules for how the township disposes of its newly-acquired bank of tax-reverted properties.

Miller noted that the Mapleridge house had not sold at two public auctions including a minimum bid one where it could have been bought for a lot less than $80,000.

Trustee Frank Kasle, who supported the sale, commented that “a bird in the hand is worth two in the bush.”

The board voted six to one in favor of the sale. Anderson voted no. She said her concern moving forward is that all interested parties have a chance to bid on the tax reverted properties. She said she knew someone interested in buying the Mapleridge property but did not know the township was ready to offer it for sale.

Anderson also cast the only opposing vote to the sale of a property at 2105 Mill Rd., formerly Thompson Creek Turkey Farms, which has sat vacant for several years.

Anderson said she would like to postpone further property sales until the board has a disposition policy in place.

Miller said Empowered Enterprises, a neighboring church had originally offered $50,000 for the property but revised it to $37,500 based on the amount of rehabilitation needed.

The board voted 6 to 1 to sell at the lower price with the stipulation that the property be brought up to code within 12 months.

The agreements all include time limits to bring the properties up to code before the sale is finalized.

It was noted that a purchase offer had come in for the house at 2498 Lavelle, the Boatfield house is subject to an insurance claim and a neighbor of the Flushing Road offered to demolish it in exchange for the deed. The land is valued at $5,000.

Demo bids will be sought but $5000 to $7000 is the estimated cost of demolishing the aforementioned properties, said Tracey Tucker, building director.

Trustee Kasle cautioned that the board be more careful in keeping future taxreverted properties because the township is losing money on those that have to be torn down.

Miller noted that if the township does not take over the properties, they tend to languish for years at the Landbank which is overwhelmed with properties that eventually end up on the demo list anyway. “We end up with the problems,” she said of blight and other issues associated with vacant properties.

If the township takes them over and sells the vacant land to an adjacent landowner, the properties go back on the tax roll sooner she said.

Kasle said he did not think the township should be bearing the expense of demolitions.