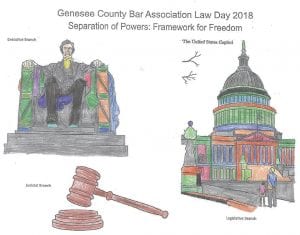 The first-place winner in the second grade for the Law Day poster contest for elementary school students, depicts this year’s theme “Separation of Powers: Framework for Freedom.” Winners were also chosen for third, fourth and fifth-grade students.

FLINT TWP. — To help raise awareness of the annual Law Day Celebration, the township board has approved a resolution supporting events sponsored by the Genesee County Bar Association.

Each year, bar associations nationwide designate May 1 as Law Day to educate the community about the rule of law and its role in preserving freedom. This year’s theme is “Separation of Powers: Framework for Freedom.”

The theme recognizes the importance of a system of government with distinct and independent branches – Congress, the Presidency, and a Supreme Court; and is a reminder that each branch serves as a check on the power of the other branches.

Awards bestowed will include Crime Victim’s Advocate of the Year presented to Julie Lopez, director of Crime Stoppers; the Liberty Bell Award presented to Paul Rozycki of East Village Magazine and the Golden Apple Award to Jodi Aboneaaj of Davison High School and Scott Thurlow of Grand Blanc High School.

State of Michigan vs. Taylor Rodgers, a Mock Trial competition being held in 7th Judicial Circuit Court. It will involve a fictitious alleged high school bullying case that eventually leads to violent retaliation which Rodgers claims as self-defense.

Participating students are given an extensive, realistic list of pre-trial and courtroom rules including a dress code and how to present witnesses.

Winners of a poster contest have been selected. One winner each in grades 2-5 received a $25 gift certificate. The winning posters will be displayed at the Law Day Luncheon and also featured in Bar Beat, the bar association’s bimonthly magazine. All submissions, including the winners, will be displayed at the Flint Public Library during the month of May. All students who submitted an entry will receive a certificate of participation.