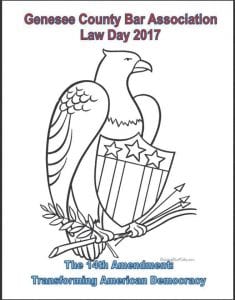 This drawing was provided for the Law Day Elementary School Coloring & Poster Contest.

FLINT TWP. — Teen minds are getting ready to tackle a timely subject during this year’s Genesee County Law Day observance.

People of the State of Michigan v Francis Lawrence is the fictitious topic of the 2017 High School Mock Trial Competition, which involves a teen sexting charge. The mock trial is one of several local events being sponsored by the Genesee County Bar Association. A poster contest for younger children also is being held and awards will be handed out to area activists during the annual Law Day luncheon.

“The 14th Amendment: Transforming American Democracy” is the theme of the 2017 Law Day Proclamation that area municipalities are being asked to support.

The Flint Township Board adopted the Law Day resolution at its March 6 meeting. It cites Law Day, designated by the U.S. Congress to be held on May 1, as a public acknowledgement of our nation’s and State of Michigan’s “heritage of justice, liberty, and equality under the law.”

Trustee Frank Kasle, who is a retired attorney, read the entire proclamation and stated that the Law Day theme is important in light of the current political climate. The 14th Amendment of the U.S. Constitution, defends equal rights. The proclamation acknowledged the history of the 14th Amendment including that it has “served as the vehicle by which many of the protections in the Bill of Rights have been found to be enforceable against state and local government actions that infringe upon fundamental liberties; … defined national citizenship for the first time and guaranteed that the privileges or immunities of United States citizenship would not be denied to any individual citizen; … served as the basis of and inspiration for landmark civil rights legislation and court decisions protecting and advancing the rights of Americans.” Spearheaded nationally by the American Bar Association, Law Day is designed to provide a civic education to the public through a series of events.

The aforementioned mock trial competition is set to be held on April 28 in the 7th judicial Circuit Court. It will be preceded by the annual Law Day Luncheon at the Masonic Temple, where the county Bar Association will present its Golden Apple Award to an “outstanding educator in Genesee County.”

Local Law Day activities also included an Elementary School Coloring & Poster Contest open to all 2nd, 3rd, 4th, and 5th-grade students in Genesee County. A $25 gift certificate will be awarded to one winner from each grade level. All winning posters will be displayed at the Law Day Luncheon, on the county bar association website at www.gcbalaw.org,, and in the March/April edition of its Bar Beat bimonthly magazine. Also, all contest submissions will be displayed at the Flint Public Library during the month of May. The deadline has passed for contest entries. Full instructions for participation in the High School Mock Trial competitions are posted online at www.gcbalaw.org/file/2017MockTrialCase.pdf

Participants will be calling witnesses and mounting a defense based on the fictitious background provided which basically found that the defendant used a cellphone to publicly share a nude photo of a person who texted it privately. School teams in the competition will be provided a Mock Trial Notebook containing necessary materials.