Twp. board supports naming of pond 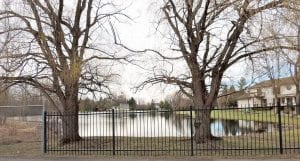 This view of the pond from the parking lot of Our Lady of Lebanon Catholic Maronite Church shows the Baillie’s home at the far end. The church has consented to a request to officially name it Baillie’s Pond.

FLINT TWP. — If all goes well, a placid stretch of water visible from Calkins Road, just west of Graham Road – home to swans, fish and other aquatic wildlife – will have an official name.

Since the 1960s, locals have called it Baillie’s pond in reference to the family who built and has maintained it for more than 50 years. But on maps, the body of water appears only as an unnamed geographical location.

Hoping to change that, Janice Baillie, whose husband Stephen’s family has owned the western edge of the pond since 1955, approached the township board about officially naming the pond.

Turns out that an official naming is actually a multi-step process that must also pass muster with the Genesee County Board of Commissioners and the U.S. Department of the Interior U.S. Geological Survey, according to township supervisor.

The township board completed step one at its March 21 meeting by unanimously approving a resolution in favor of naming the body of water Baillie’s Pond. No timeline was given on how long the rest of the process will take.

One requirement is that the namesake person has been deceased for more than five years. Janice Baillie provided a death certificate to document that her father-in-law Thomas Baillie Jr. died in 1969.

Thomas Baillie and his wife Mary purchased the property in 1955, moving their family here from Canada after emigrating from Scotland, post World War II, according to a history provided by Janice Baillie.

Back then, the area adjacent to their home was more of a swampy marsh. But after settling in, Thomas Baillie hired someone to dredge out the western end which it is now spring fed and supportive of wildlife.

The pond was smaller then. But it doubled in size a few years later when the eastern end was dredged by the Our Lady of Lebanon Catholic Maronite Church which purchased the property.

Steve Baillie, who is a pastor at First Presbyterian Church of Flint, became the pond caretaker at age 14 when his father died. He purchased the house and property from his mother in the 1980s and has lovingly looked after the pond ever since.

He built a seawall and has been responsible for chemical treatments of the water for algae and weeds so that ducks, swans and fish can live there.

“Steve has lived all but six months of his entire life of 60 years at this property and has provided a beautiful, peaceful setting for folks to enjoy as they drive by,” Janice Baillie wrote. “Folks who grew up around here (myself included) have always called it Baillie’s Pond and remember many years of fishing, ice skating, playing hockey, ice racing motorcycles and catching tadpoles from this pond.”

She also provided a letter of support from Our Lady of Lebanon church.

In his letter of support, Church Pastor Pierre T. Bassil wrote: “We would like to acknowledge that we have always appreciated the hard work and effort that your husband, Stephen Baillie, has shared with us in purchasing chemicals for and maintaining the upkeep and care of the pond. His overall care and love of this pond have always been apparent and we hope that this decision to allow the pond to be officially named “Baillie’s

Pond will be a tribute to your husband and his family.”

One response to “Twp. board supports naming of pond”