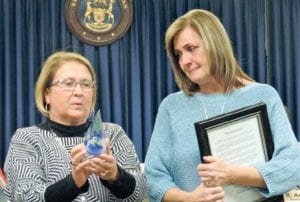 Former Clerk Kim Courts returned to present a parting gift to her deputy clerk Lorri Donovan, who has retired.

Courts, who recently stepped down after three four-year terms in office, presented Donovan with an engraved crystal paperweight praising her abilities as an able assistant.

Township Supervisor Karyn Miller read the official proclamation describing Donovan as a loyal and thoughtful employee. Donovan first worked in the Sewer and Water Department for nine years before moving to the Elections Division for her remaining tenure.

“She took her positon in the Elections Division seriously and her organizational skills were above and beyond excellent,” the proclamation stated.

Donovan devote her time and attention to improve election efficiency. Her passion for the work made it “look easy.” She enjoyed working elections.

Donovan also is credited with streamlining Electronic Poll Book Training. Donovan served as Court’s deputy clerk from January 2012 until November of this year.

She balanced her personal and professional life as a wife, mother, grandmother and great grandmother.

Donovan’s retirement was recognized with retiring police clerk Lynn Davis with a cake and coffee break during the township board meeting.