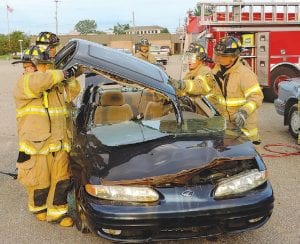 Firefighters pop the hood and lift off a roof of a vehicle during Jaws of Life training.

FLINT TWP. — Firefighters do a lot more than extinguish fires. Extricating people trapped in vehicles after a crash is another of their lifesaving duties.

Earlier this week, four wrecked vehicles were brought in for their annual Jaws of Life training at Fire Station No. 1. Fortunately no victims were involved. Working in teams, the crew tackled extrication tasks such as knocking out windows, cutting the roof off, prying open the hood and lifting the dashboard out.

Unseen dangers can pop up during the process, said Flint Township Fire Chief John Ringwelski, who supervised the training. One of the first things they do is cut the battery lines to deactivate the airbags, if not already deployed. Otherwise, the force of a deployment could cause serious injury to crash victims or firefighters.

Gas and oil line leaks might also have to be dealt with.

Vehicle steel frames are reinforced and much harder to cut through than they used to be, Ringwelski said. Sometimes extrications can be done in a couple of minutes and sometimes it takes longer depending on how severely the vehicle was damaged and the make or model. 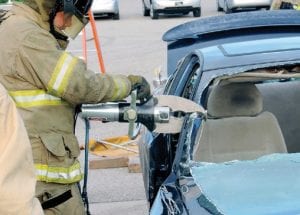 “Sometimes we can’t get people out through the door. for whatever reason, they are jammed up too much so they have to take the roof off to get them out,’’ he said.

That is done one of two ways, cutting all four posts and taking the roof off or cutting two posts and folding it back.

During the training, the firefighters practice prying open the hood because they tend to have to do that for car fires.

Paramedics don’t take over right away at extrication scenes.

“We do the patient removal in conjunction with the ambulance driver,’’ Ringwelski said.

Usually what happens when firefighters get the twisted metal out of the way, the EMS technicians come in to stabilize the victims with perhaps a neck collar, splint or IV.

But it takes lots of manpower to lift a victim out of a car especially through the roof. Firefighters on the scene help do that.

Ringwelski said Jaws of Life practice is one of firefighters favorite mandatory trainings because it’s hands-on and they get to rip apart cars.

For anyone interested in joining their ranks, the fire department is currently hiring. The application process is posted on the township’s website at www.flinttownship.org.