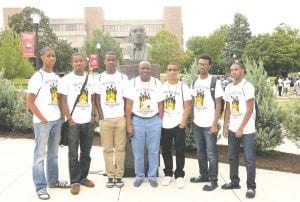 Sam Wells, director of the Alpha Phi Alpha Esquire Mentoring &Leadership Program, will be honored as a Mentor of the Year at the 2017 Governor’s Service Awards ceremony next month

FLINT TWP. — Samuel Wells of Flint Township will be among the 49 winners of the 2017 Governor’s Service Awards to be presented during a special ceremony, hosted by the Michigan Community Service Commission, at 7 p.m. on Monday, August. 21, at the Detroit Opera House.

Since 1994, Michigan’s Governor and spouse have hosted the awards to pay tribute to outstanding volunteers from across the state, according to a press release. The winners are individuals, businesses and nonprofit organizations that were selected for their commitment to volunteerism, service or philanthropy.

“These individuals and organizations are role models for other people to follow,” said Gov. Rick Snyder. “The impact they have on other people’s lives is incredible. They show us how to overcome obstacles and do good things for other people. They demonstrate tremendous spirit and we are thrilled to recognize them.”

Wells is one of seven people being recognized in the Mentor of the Year category. The award honors an individual who provides youth (ages 25 and under) with tools and skills to become successful.

Wells is cited as a man who leads by example. He has led efforts to help young men become the next generation of leaders through the Alpha Phi Alpha Fraternity’s Esquire Mentoring and Leadership Program, which includes predominantly African-American young males from Flint and Genesee County.

Wells helped develop the program and serves as the director.

To his peers, Wells has proven he will do anything he can to mentor the young men and make sure they are successful in life.

“His tireless dedication is a labor of love,” said his nominator David Guinn. “I have seen him give the shirt off his back for job interviews, prom or other important nights.”

The awards event also will commemorate the 25th anniversary of the Michigan Community Service Commission, the state’s lead agency on volunteerism. The public is invited to attend the free event but asked to register at mcsc.ticketleap.com/2017-governors service-awards.

“We are excited to celebrate the Michigan Community Service Commission’s 25th anniversary by honoring the state’s wonderful volunteers, philanthropists and organizations,” said Ginna Holmes, Michigan Community Service Commission executive director. “Each winner has a unique story about helping those in need, improving their community and making a difference in Michigan.”

This will be Gov. Snyder’s seventh year of involvement in the Governor’s Service Awards, which were launched by Gov. John Engler in 1992 and maintained by Gov. Jennifer M. Granholm during her terms in office.

To learn more about the winners and the event, please visit: Michigan.gov/ GovernorsServiceAwards