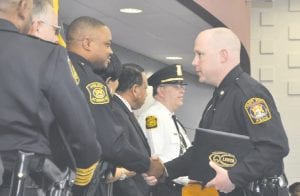 Chief Terence Green of the Mt. Morris Police Department was the keynote speaker in a ceremony held at the MCC Event Center on the main campus, 1401 E. Court Street.

LERTA is a 16-week, intensive program that meets the Michigan Commission of Law Enforcement Standards (MCOLES) training requirements and prepares students for the Law Enforcement Licensing Examination. LERTA holds two sessions each year, designed to coincide with the Fall and Winter Semesters at MCC.

Dieck and Roland both were hired by Flint Township on January 17 as uncertified entry level police officers. At that time, both were employed as a corrections deputy with the Genesee County Sheriff’s Department, according to Police Chief George Sippert. 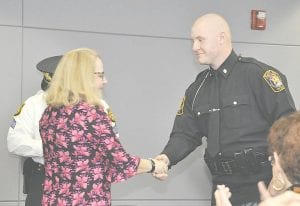 Dieck is a graduate of Swartz Creek High School and earned a Bachelor’s Degree in Criminal Justice from Lake Superior State University. Additionally, he holds two Associate Degrees in Homeland Security and Criminal Justice. While at Lake Superior State University, he was a three time “All American” track athlete in shotput. In 2015, he won the NCAA Division 2 indoor National Championship in shot-put.

Roland is a graduate of Byron High School and has a Bachelor’s Degree in Criminal Justice from Western Michigan University. Since 2002, he has served with the Michigan Army National Guard, obtaining the rank of Captain and now acts as Company Commander. In 2003, he was deployed to Guantanamo Bay, Cuba, for eleven months and again to Afghanistan for eight months in 2010.

The Winter 2017 class was LERTA’s tenth session since the Academy offered its first class in September 2012, according to a press release. The Law Enforcement Regional Training Academy operates under the authority of Chief Theresa Stephens- Lock, Executive Director of MCC’s Department of Public Safety. LERTA is located at MCC’s Southern Lakes Branch Center at 2100 Thompson Road in Fenton.

LERTA is a professional learning environment designed to give the basic training and education needed to begin a career in law enforcement. Academic excellence and personal integrity are stressed during the Academy. Recruits are mentally and physically challenged on a daily basis. The learning environment is a combination of traditional classroom instruction, skill area instruction and practical exercises conducted by members of the LERTA staff as well as regional instructors. Others graduating from the Winter 2017 term were Austin Fray, Alexis Frierson, Garrett Guest, Joseph Kennedy, Victoria Lambaria, Christopher Metropoulos, Noah Pillsbury, Cristopher Scott, David West and Quion Wheeler. Anyone interested in enrollment in the Law Enforcement Regional Training Academy is strongly encouraged to review the MCOLES Requirements for Law Enforcement Officers at www.michigan.gov/mcoles. For more information, visit www.lerta.mcc.edu or call (810) 410-1900. — Rhonda Sanders